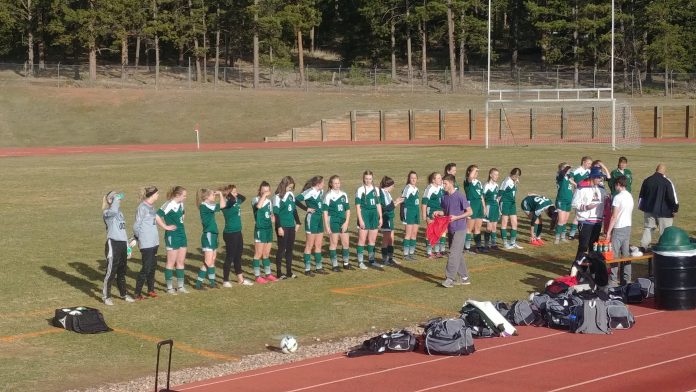 As the soccer season progresses, the Lady Panther kickers have been improving their game and are gaining momentum. At their current rate of goal strikes and decisive wins, the girls could see playoff action.

In fact,  their early success just might give them a chance at being one of WP’s top teams this year.

To date, the girls have only played three matches due to weather-related cancellations. The team took a week off for spring break, but then they were back on the fields last week.

The girls are currently 2-1. They won their first game against Pueblo Central 10-0 and the game was ended due to the mercy rule. Their second match they played the tough Falcon girls and just barely lost by a single goal.

Last week, the Lady Panthers took on Mitchell and dominated the game. The devoured Mitchell by a 11-1 margin, when the mercy rule went into effect.

According to the team’s coach, Amy Smith, the girls have made some vast improvements as the season has progressed. The ladies have been trying techniques to prepare themselves for their tougher matches coming up in the next few weeks.

“We sat down and figured out what were the areas we wanted to improve on so we can come in and dominate those harder games,” Smith said. “And then they implemented them during these easier games so they could practice their skills. And it just completely elevated their game. It was so pretty to watch this last game. They were just so in sync and crisp.”

The coach said that the star players that shined in the first part of the season have remained strong. But she also noted that the other girls on the team have also stepped up and improved their game.

According to the coach, sophomore Lilly Urban used to play only defense, but now she plays every line in the field. She has quickly become another backbone of the team with three goals scored.

Junior Esther Rohman has developed and found her niche this season. She has moved from midfield to defense and is now a key player when defending the ball.

Sophomore Emma Vonderharr has also improved from last season and she was awarded player of the game during their last match. “She has learned how to funnel her energy and passion and she has become such a leader on the field,” the coach said. “There is not a single person on the team that has a more powerful foot than she does.”

Junior striker Marin Kleppe has also come out of the shadows this season. The coach said that she has now become one of the team’s most valuable assets.

Coach Smith said that she recently asked her varsity players what they would like people to know about their team this year.  They replied that the “one thing that has made them stronger is that they have become more than teammates and more than friends,” according to the team skipper.

“They now consider each other family,” she added. Last week most of the varsity players drove down the Pass to support their “younger siblings” on the JV team. The team’s cohesiveness should make the ladies a powerful force to reckon with this season and in the future.

This week, the girls have two big games coming up. The coach noted that the results should determine which teams will be tough this season.

The girls play one more week of non-league matches this week and then they take on harder league teams during the following week. This Tuesday, the ladies challenge the 1-2 James Irwin Jaguars on the road. Then on Thursday, they play another away game against the 0-2 Sierra Stallions.

The team’s first league match will be against Coronado on the road next Wednesday.

The baseball season for Woodland Park has officially kicked off, but Mother Nature has not been a friend of the Panthers. Due to weather-related cancellations, the boys have only played one game so far.

And during their first and only match of the season, the team fell to Pueblo Central 15-0. The boys continue play this week as they have four games scheduled.

The good news is the Panthers are slated to play their first home matches this week, weather permitting. On Tuesday they play at home against Mitchell at 3:30 p.m., and on Saturday they play at their home field against Sand Creek at 10 a.m.

Make sure to get out to the Meadow Wood Sports Complex and support the local baseball stars.