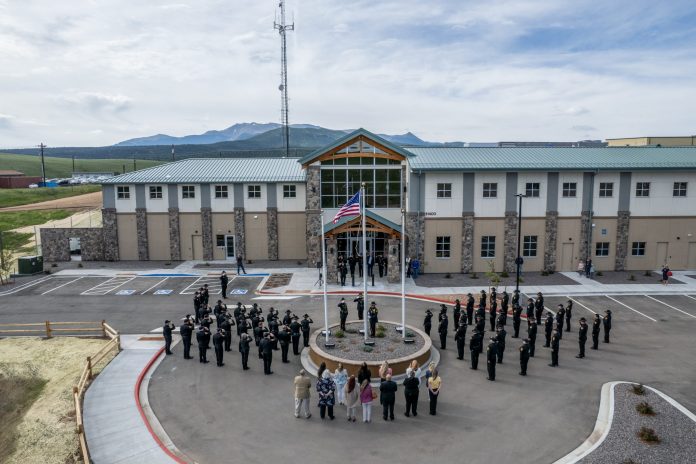 The Teller County commissioners have now officially closed the fiscal door on the new sheriff department expansion in Divide, called the Gary Shoemaker Building, in dedication to one of the longest-serving sheriffs in the county’s history.

It was a project that struck a number of hurdles due to the coronavirus epidemic, labor woes and other delays.

The commissioners in a recent meeting lauded the many people involved in the project that made it a success and put the lid on costs.  They noted that the project architects and contractors overcame tough odds with the pandemic and the incurring labor shortages. The final costs, according to the commissioners, were pretty close to what was planned for originally, with a $7.5 million final price tag.

“All costs have been accounted for,” said Commissioner Bob Campbell. “This is not a Taj Mahal.”

He emphasized that the expansion, which opened for business last summer, involved no additional taxpayer dollars and was funded solely by monies that the county saved over a long-term period.

Some critics have complained about the mega expansion, compared to the previous facility, which only sported a 6,000-square-foot building. The new facility is more than four-times that of the original headquarters and features a few major perks.

The commissioners admitted the facility, named in honor of former Sheriff Gary Shoemaker, is much bigger than the sheriff department’s  previous digs, originally constructed in the 1980s. But the county commissioners maintained that the project was aimed at meeting the county’s  long-term needs.

They also noted that the previous facility didn’t meet current demands for years, and put serious strains on the agency’s operations. In fact, it was originally built as a fire station.

In their recent meeting, the commissioners praised the architectural firm, the contractors and the county management team that reviewed the project.  County officials admitted the facility had to overcome a variety of change orders.

In recent employee awards, both Lynda Morgan, the director of community development services, and Sheryl Decker were recognized. Decker, the county’s head administrator for 17 years, who has worked with the Teller government since 1996, has officially stepped down. She was honored during the most recent commissioners meeting on March 22 in an emotional ceremony, and then a more festive celebration occurred last Wednesday at McGinjty’s Wood Oven Pub.

Decker was cited for her management style and the way she kept politics out of the county’s operations. She succeeded in working with close to 10 different group of county commissioners.

In  other employee Morgan  was lauded for 25 years of service and vastly improving the services provided by the Teller government. She was cited as taking the lead role in developing the community development services agency, which oversaw planning, building and other departments.