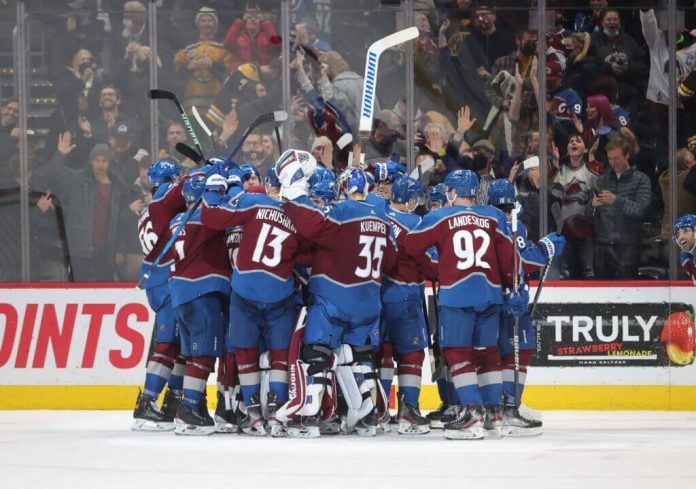 The Avs are still looking like they have a chance at seeing the big game this year if they keep up their momentum. In any case, they are definitely on track to be Colorado’s most successful professional sports team of the year.

Currently the Avalanche is still in first place in their Central Division and the Western Conference. And, it is pretty safe to say they are the best team in the league, but there are a couple of teams in the Eastern Conference that have records close to Colorado.

The good news is: The team has stayed strong even as the season slowly winds to an end. In interviews, many of the players have stressed that they know they need to continue to play hard and keep winning.

After a big 6-3 win over the Philadelphia Flyers last Friday, one of the players made history. Defenseman Cale Makar scored two goals during the game which gave him the Colorado Avalanche franchise record for most goals scored in a season by a defenseman.

Makar so far this year has scored a total of 24 goals to break the record. And, he still has 17 regular season games left to add to that number.

Another good thing, is that Makar is not the only player having a good season. Center Nazem Kadri currently leads the team in scoring with 25 goals and 54 assists.

Right Wing Mikko Rantanen is right behind Kadri with a total of 77 points scored. And, he has a better shot percentage at 14.8 percent.

The team’s goalies have also held together strong during the season. Darcy Kuemper has stood in front of the net during most of the games and he has been able to hold onto a 2.39 goals against average.

With the Avs success, it is clear to most that they will be in the postseason this year. It just depends if they can hold on and continue to succeed in the playoffs when winning really counts.

However, the facts prove this to be false. The Avs currently are the fifth heaviest team in the league and they are 9-1-1 when playing the top four heaviest teams.

This week, the Avs will have to keep up their good work as they play three key matches. On Tuesday they take on the first place Pacific Division 39-17-8 Calgary Flames on the road.

On Thursday, they battle the 28-28-8 San Jose Sharks on home ice. Then on Saturday they stay at home to play the 39-17-10 Pittsburgh Penguins.

There is only about a month left of the regular season as the Avs play their final match on April 29. So, those who have not had a chance to catch a game, April is the month to do so.

Even though Major League Baseball had a delay due to contract negotiations between the league and the players’ union, the Rockies are back on the field playing baseball. Spring training was delayed a bit, but the Rockies started playing on March 17.

So far, the Rockies have been hit or miss as it seems like they win every other game but then lose every other game. Their latest match last Friday though was an impressive 17-1 rout of the Chicago Cubs. The   The team has gotten much more aggressive on the free agent front.

The big news has been all of the changes the team has made in the offseason. Last year, many Rockies fans new that star player Trevor Story would be moving on and it came as a surprise when he didn’t get traded mid-season.

But everyone knew that Story would find a new home for the 2022 season.  And last week, it became official that the shortstop would be moving on when he signed a $140 million, six-year contract with the Boston Red Sox.

The good news though, was that the team also gained a star player after losing one. Former Chicago Cub Kris Bryant just recently signed a $182 million seven-year deal with the team. That move has excited Rockies’ fans, who were so used to shaking their heads in disgust when Bryant littered Coors Field with home runs during games against the Cubs. Not sure what was worse, the home runs or the yells from Cubs fans who always bombard Coors in record numbers.

However, currently the Las Vegas odds gurus are not giving the team very good odds to go all the way in 2022. According to FanGraphs, the Rockies only have a 0.2 percent chance to make the playoffs and a zero percent chance to win the World Series. Hope the Rocks prove the predicters wrong.

The team will continue to play at spring training in Arizona until the regular season kicks off next month. The Rockies first game is their home opener scheduled on April 8 against the L.A. Dodgers.