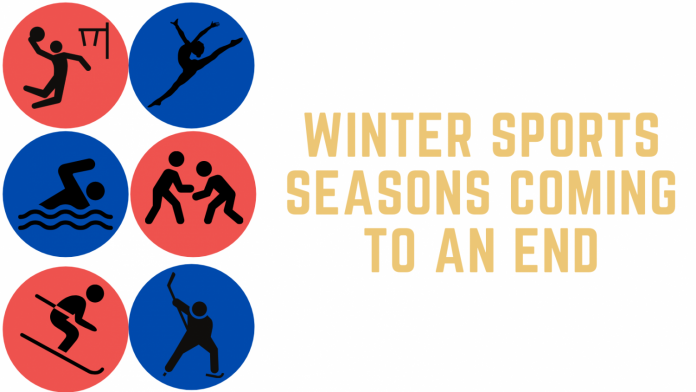 The winter sports season has officially reached a conclusion, with some memorable performances by Woodland Park school teams  Here are a few highlights:

The wrestlers finished up their season two weekends ago when the team’s three seniors battled in the state championship. Overall, the boys did well in state, but their star wrestler Brady Hankin just fell short of winning his fourth state championship in a row and placed second in the 138 lbs. weight class.

Hankin fell in a final match to Fort Lupton sophomore D’mitri Garza-Alarcon by a close 4-3 decision. The team’s coach, Casey Hankin (the father of Brady Hankin) said that Brady wrestled hard but was just overcome by a returning state champion who he had lost to previously in the season.

The other two wrestlers who went to state, Adam and Eli Garner, did well at the tournament and both made a spot on the podium. “The Garner boys just wrestled awesome, they were just amazing,” the team’s coach said. “They honestly did as well as they could. They both put it all on the mat. It was just a great showing from them.”

Brady Hankin will move on to wrestle at the college level at the University of Northern Colorado in Greeley. In a bad blow for WP sports, Coach Casey Hankin said that he will not return as the high school team’s head skipper next season because he wants to spend his time watching his son wrestle in college.

During the same weekend the boys battled at the state championship, the girls also brought two stars to the state tourney. Junior Trinity Diamond and sophomore Arial Johns both did well enough at the regionals to earn a spot at state.

However, after a rough weekend of matches, neither of the girls did well enough to place. But now that girls’ wrestling is growing in popularity as a sport, expect to see these girls improve over the next couple of years.

The girls’ coach Dustin Rodriguez said that he is planning on entering the girls in more club tournaments during the offseason. He said that he thinks getting them more practice will make them more competitive against other girls in the state.

The Panthers played well this year and ended up with the best season they have had in the last several years. The boys ended up in fourth place in their league with an 8-5 league record and an 11-11 overall record.

The boys broke their losing streak on Feb. 19 when they beat Lamar at home 53-24. But then they lost to Manitou Springs again last Wednesday 66-31.

The boys then went on to play in the district tournament to see who would qualify for the state and regional championships. However, the Panthers barely fell to La Junta during the first game of the tournament by a 61-59 score.

At the time this article was written, the Panthers were still scheduled to play at least one more match against Buena Vista. But it is likely the Panthers will move on in the post season.

The Lady Panthers ended their 2021-2022 season with a few key wins. But they fell short when it came to making a big run in the playoffs.

The team finished with a 7-13 overall record and a 4-8 league tally. The girls ended up in 9thplace in their league.

But then during their last regular season game, they squeaked ahead of Manitou Springs by a 54-53 score. However, once the ladies entered the district tournament on Feb. 19, they got eliminated by Salida due to a 54-28 loss.

During the first part of the winter sports season, the Panthers looked like they were going to win their league for the second year in a row and make it to the post season. But then, the team suffered some big losses at the end of the season that eliminated them from playoff possibilities.

The team ended the season with a 6-10-1 overall record and a 4-3-1 league record. The Panthers ended up third in their league falling to Cheyenne Mountain (first place) and Rampart (second place).

The Woodland Park High School Cheerleading team took second in the state championship, which earned them a spot at the nationals. The team traveled to Orlando, Florida over Super Bowl weekend and competed against all-girl teams from across the country.

In the end, the local cheerleading team took 12th place in their Group D with a score of 63.45. Unfortunately, the girls did not get a high enough score to move on to the semi-finals round.