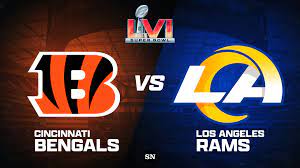 It’s now official: The Super Bowl will be played between the Cincinnati Bengals and the Los Angeles Rams at SoFi Stadium in Inglewood, California on February 13.

It has been a crazy playoff season this year. This is the first time ever, that four of the five home teams lost to lower seed teams.

Last Sunday, the Cincinnati Bengals came from behind to beat the favored Kansas City Chiefs in their back yard to win the AFC championship game, sending them to the big show. The Bengals erased a 21-point deficit in the second half to tie the game at 24.

The Chiefs had a chance to put the game away earlier in the game, but they failed to convert a red zone possession near the end of the first half.  If the Chiefs opted to kick the field goal, instead of going for the touchdown, they would have won the game.

The Chiefs dominated the first quarter, but ran flat in the second half. Behind Bengals Quarterback Joe Burrow, the Cincy came back partly due to miscues, sacks and dropped passes by the Chiefs.

The Chiefs won the coin toss as the game went into overtime and many thought that was all they needed to ice the game. However, the pass of Chiefs Quarterback Patrick Mahomes to Tyreek Hill was intercepted, given the Bengals a chance. Borrow and the Bengals drove the ball down the field to the 21-yard line and kicked the winning 31-yard field goal.

There has been a lot of hub bub about the overtime rules this year. The rule states that if the first team to get the ball in overtime scores a touchdown, game over. Some believe the winner of the coin toss is usually the team that wins in overtime. Under these rules, coin toss winners ended up prevailing in 52.8 percent of overtime games, per NFL Research. That’s far from decisive. But in the playoffs, coin toss winners are 10-1, winning 90.9 percent of overtime contests. Maybe this does need to be looked at by the league.

The San Francisco 49ers played a much better game than expected but came up short in the end.

San Francisco  jumped ahead of the Rams in the third quarter, 17-7, but the Rams receivers, Odell Beckham Jr. and Cooper Kupp were too much for the 49er secondary when the game was on the line. The Rams outscored the 49ers in the fourth quarter 13-0, to come from behind for the win.

When the game was tied late in the fourth 17-17 it looked like this would be another overtime game, but the Ram defense held the 49ers and on the next drive scored another field goal which ultimately decided the game.

With less than two minutes left, 49ers Quarterback Jimmy Garoppolo tried in vain to put the Niners in a position to tie the game with a field goal, but when he was pressured by Ram defenders, Von Miller and Aaron Donald, he lofted the ball which was tipped and intercepted by the Ram’s Travin Howard. All that was left was for Rams Quarterback, Matthew Stafford to down the ball, and run the clock out. Final score: 20-17.

On To The Big Show

Now the die is cast. Super Bowl 56 will be played on February 13 between the Rams and the Bengals.

Both of these teams have strengths on offense and defense. The X factor for the Bengals will be how Quarterback Joe Burrow handles the pressure of his first Super Bowl appearance. This will be Stafford’s first time in the big show also, but he’s been around the league a lot longer than Burrow. Advantage: Rams.

Both defenses are strong. The Rams are perhaps the better all-around defense, but the Bengals defense knows how to hang tough when the going gets rough.

Neither of these teams ran the ball well in the championship games. Look for a lot of flying footballs in this Super Bowl.

While the Rams have more experience as a team, the Bengals have that ‘never say die’ attitude. This has the makings of one of the better Super Bowls in the last decade. Except of course Super Bowl 50, when the Broncos kicked the crap out of the Carolina Panthers.