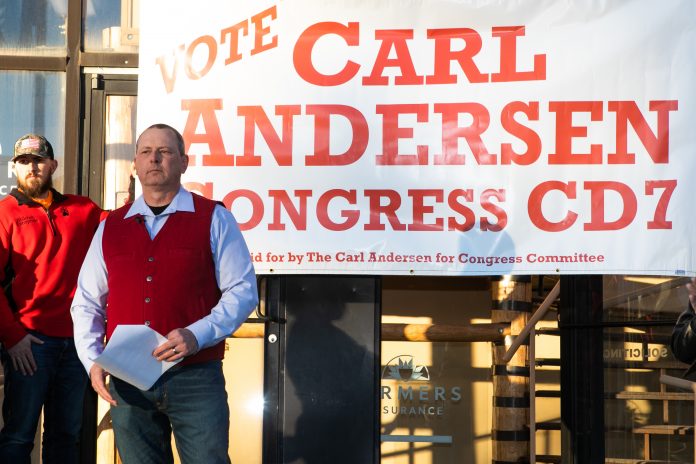 As the 2022 elections season kicks off, more local figures have announced their run for key government seats.

But the election horse race isn’t just limited to the county and city arena.

Shortly after the Woodland Park city council and  mayoral candidates were made official last week, a Teller County resident made a special announcement about his run for a top national spot that surprised many  political observers, including TMJ writers.

Last Wednesday, Divide resident and local business owner Carl Andersen announced that he will be running for Colorado’s newly realigned 7th Congressional  District. Andersen is not new to the political arena, as he has previously sought the county commissioner position.

In 2018, Carl Andersen ran against Bob Campbell to fill the District 2 Teller County Commissioner seat after incumbent commissioner Dave Paul was term-limited. However, Campbell defeated Andersen during the Republican primary elections by racking up 49 percent of the votes.

Andersen, though, had a hefty group of supporters, in advocating a pro-business approach to government, and sought and end to many current recreational restrictions.

Andersen has since stayed involved in the community by being part of the Ute Pass Kiwanis organization and being a regular staple at the Teller County Republican meetings. He is a strong supporter of the Republican Party and decided to go after a seat in congress just after the state’s recent redistricting procedures changed which district Teller County is in.

Previously, Teller was part of the Congressional District 5, currently occupied by Doug Lamborn, which placed our region with El Paso, Park and Fremont counties.  However, the redistricting process, done after the census, has changed that alignment.

Andersen will be running in the new district that now includes Broomfield, Jefferson, Park, Lake, Teller, Chaffee, Fremont, and Custer Counties. According to Andersen, there are already two people planning to petition to be on the ticket to run for the Republican seat during the primaries in June.

When Andersen made his announcement last week, he invited members of the public to his Andersen Enterprises building in Woodland Park. He was introduced by Teller County Assessor David “Colt” Simmons and local resident/veteran Keith McKim.

During his speech, Andersen described how he thought the U.S. Constitution has recently become under attack. He also briefly mentioned topics like the Second Amendment, immigration, public health mandates, and school choice.

“As I look out amongst us, I have to say our generation has allowed this mess to happen and I believe it is our duty to work together to fix it,” the congressional candidate said. “When I look at my kids and my grandkids, the last thing I want to leave to them is a debt that I cannot pay and, in their generations, they cannot pay either. For these reasons, and many more (this is just the tip of the iceberg we are talking about today), I come today to announce my candidacy for the office of U.S. Congress for Colorado’s Seventh Congressional District.”

Andersen now has a long road ahead of him as he works towards defeating at least two other candidates to get on the Republican ticket. However, even if he does become the Republican nominee, he will have to run against whomever is picked to be on the Democratic ticket.

And some experts say that Democratic Party has an advantage in this district, since it includes the urban Jefferson and Broomfield counties that are quite populated.

The seat is currently held by Democrat Ed Perimutter.  But Perimutter, who has  held this seat since 2007,  has announced plans to retire at the end of the term, meaning that this  position is up for grabs.

This marks the first major announcement of 2022 regarding a local resident seeking a high-profile congressional seat.

Green Box Snags $25,000 Grant From National Endowment for the Arts