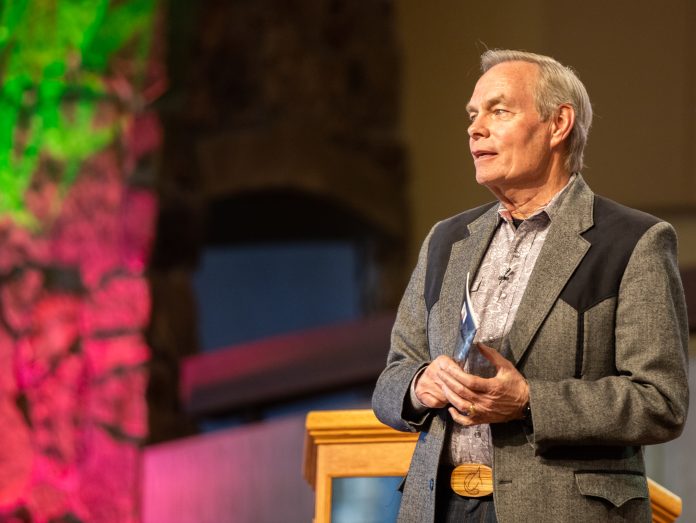 AWM Projected to Generate $90 Million in Annual Revenue by 2030

After months of speculation, Charis Bible College Founder Andrew Wommack has unveiled ambitious   expansion plans for student housing and further pursuit for the college, including an activities and event center.

This announcement capped an open house that attracted a large crowd of community residents and leaders.

In a key financial announcement, Wommack mentioned that the debt he took out for the parking garage is almost paid off.

He said that as soon as the debt is paid, the college will start the process of constructing student dorms on campus. After the homes are built, there are more plans for a student activities and event center in the future. 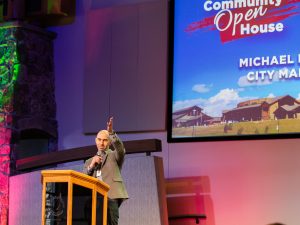 On November 6, the Charis Bible College and Andrew Wommack Ministries (AWM) put on a community open house event, which was open to the public. The event featured a number of  guest speakers, including Woodland Park City Manager Michael Lawson, Teller County Sheriff Jason Mikesell, State Representative Mark Baisley, and other local business owners and government officials. The speakers talked about how Charis has positively impacted the community since coming to  Woodland Park in 2014. 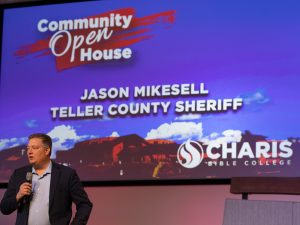 Currently the college’s main campus has more than 800 student, but that number is expected to grow by over 1,000 by the first part of next year. In total, the college has more than 7,000 students across the country in various programs.

During the meeting, Wommack took the floor and spoke about the future plans of the college and ministry. He discussed the organization’s current status on their parking garage loan as well as plans to build student housing. He also addressed rumors that have circulated since a video came out on social media that showed him saying he wanted to “take over” Woodland Park and Teller County. 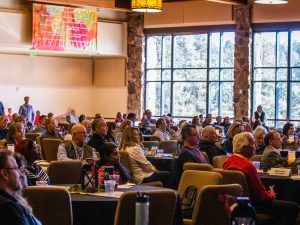 He said that the campus has invested in development costs nearly hitting the $100 million mark, consisting of a slew of new buildings. Moreover, and much different from other big projects in  Teller County, they are paid for almost debt free. AWM did take out a loan for $22 million to help finance the $28 million parking garage facility, but this loan will be paid off on Dec. 3.

Wommack said that after the debt is paid off, they will not borrow money for any construction projects again. This spring, as long as the city approves the plans, the college plans to start construction on their student housing that is slated to be completed by fall of 2023. 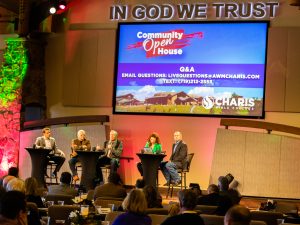 This could help alleviate the housing crisis that has hit Teller County hard over the last few years.

AWM has a design that includes four buildings, calling for 40 dorm rooms apiece with two people sharing a bathroom. The final plan includes housing for 300 students by the end of the project.

When it came to earlier comments Wommack made in April about taking over Woodland Park, he said that it was taken out of context. “Somebody said something about us taking over, that was a slip of the lip on my part,” Wommack explained. “All I was saying was ‘man, we got so many staff and students here, we need to get involved and we can make an impact.’ I was just talking about that we can make a difference. Our society is under attack.”

Wommack admitted that he is not as well-spoken as some of the people that work for him, and that’s why he has staff around him.

An economist also gave a presentation at the open house to talk about the financial and fiscal impacts the college has had on the community. He started by discussing an impact study conducted in 2020.

During his presentation, economist Dr. Michael Verdone of BBC Research & Consulting pointed out the various ways Charis provide tax revenue to the community, even though it doesn’t pay property taxes.

“Charis does not pay property taxes as a religious organization. However, the employees that they are paying and the employees that are being hired to serve all of the activity that is going on are all generating sales tax (revenue),” Verdone said. “When they are constructing a campus like this there are some use taxes that they are paying for materials. So, there is revenue being put in these communities, it just does not come from property taxes.”

The college expects to grow substantially over the next 10 years and  AWM officials believe this growth will generate more than $6 million in tax revenues during the next decade. This spurt could support more than 1,400 jobs and generate an income of $90 million by the year 2030.

After the presentations, the college offered tours of both the Charis Bible College Campus and the Andrew Wommack Ministries Headquarters.