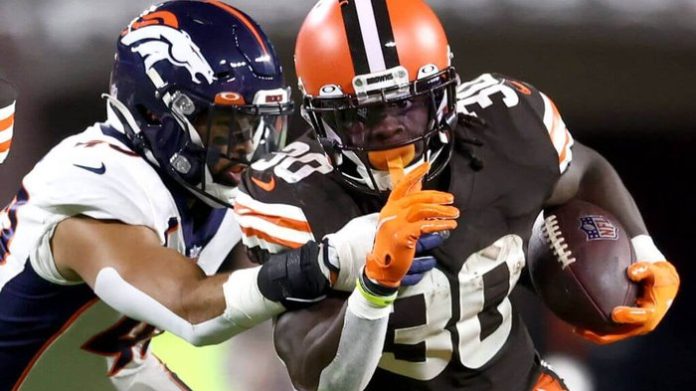 This Thursday night, the Broncos travel to Cleveland to play the Cleveland Browns on Thursday Night Football.

It is the only nationally televised game the Broncos will play this year.

The Broncos are haunted by the ghosts of bad offensive lines past. Not to mention an offensive coordinator who doesn’t have the stones to call anything but ultra conservative plays until the team is 20-plus points behind and desperately trying to catch up.

Last week the Broncos were humiliated AT HOME, by the Las Vegas Raiders. The offensive line could not keep the Raider rush off Quarterback Teddy Bridgewater. Bridgewater was sacked more than five times and the hits he received exceeded 10.

With little time left in the fourth quarter, the Broncos opened up the play book and mounted a futile attempt to erase a 34-point deficit. They managed to score 14 quick points, which cut the Raider lead to 10 points.

Oddly enough the Broncos did do what is nearly impossible by recovering an on-sides kick with less than two minutes left to play. Alas and again, too little too late, as Bridgewater threw his second interception of the game to ice the game for the Raiders.

The Raiders outscored the Broncos 31-10 through three-quarters of play. Once again, the Broncos were forced to play patty cake football due to terrible play calling by Offensive Coordinator Pat Shumer. Fans have been screaming for Shumer to be canned since last year, and the screams are only getting louder this year. Head Coach Vic Fangio has come to Shumer’s defense several times and now the fans are clamoring for his head as well. It was reported last week, that the Broncos’ head office is considering “contingency plans” for a replacement for Fangio. We can only hope those rumors are true and Fangio goes back to Chicago and opens up a pizza joint.

Enough of the bad news. Now for some good news. The Chargers were beat last week by the Baltimore Ravens 34-6. That’s about it for the good news. The standings in the AFC West now have the Chargers and Raiders tied for first place at 4-2 and the Broncos and the Chiefs tied at 3-3. OK that wasn’t much for good news but it’s all I’ve got, unless between now and Thursday night the Broncos fire Fangio and Shumer.

Now Onto  The Browns.

The Browns have been building a strong team for years after striking out in the draft for years by picking loser quarterbacks. Their troubles began in 1999 when they drafted Tim Couch. Couch played five years for the Browns. The best record they managed in those five-years was 9-7. Before that 9-7 year they never broke .500 with Couch. In 2007 they drafted Brady Quinn. Quinn started out hot in his first year with a 10-6 record, but it was all downhill after that. Next on the list of busts for the Browns was Brandon Weeden. He was sent packing after two seasons. Next the Browns drafted a hotshot out of Texas A & M named Johnny Manzel. Manzel was supposed to be the guy to lift the Browns into the upper reaches of the NFL, but his bad attitude and off the field shenanigans found him looking for another job after four lousy years.

In 2018 the Browns finally struck gold when they drafted Baker Mayfield with the first overall pick in 2018. Mayfield was blessed by the Browns who built a strong offensive line and a top five defense since he was drafted. The Browns front office were savvy, using free agency and the draft to build a true playoff contender team.

Unfortunately for the Browns, they went up against the undefeated Arizona Cardinals last week and got beat 37-14. The Browns now sit at 3-3 in the AFC North, behind the Cincinnati Bengals and the first place Baltimore Ravens.

The game on Thursday night is going to be the last best chance the Broncos have at redeeming themselves if they are going to have a winning season. Somebody in the front office needs to have a good long talk with the coaching staff to restore confidence in the team and stop playing footsie for three quarters of play.

With Shumer and Fangio still at the helm, I don’t foresee a win this week.