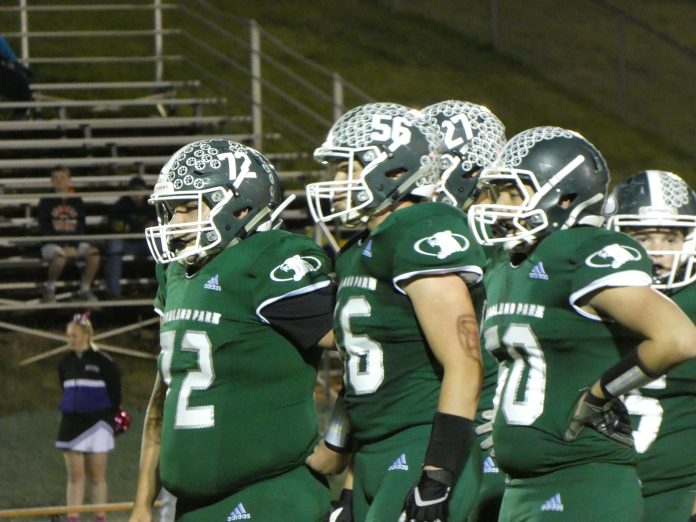 The Woodland Park Panthers’ football team played probably their biggest and most important match of the season last Friday, and one that garnered regional television coverage, as they visited the TCA Titans– one of the leading powerhouses in the state.

Unfortunately, the Titans proved to be a little too tough for WP, as they lost 41 to zip. Ouch.

Yes, TCA resembled the heroic and giant team projected in the popular film.

The Panther offense struggled all game as they were unable to put any points on the board. Their defense also had trouble stopping the Titans star rusher Cade Palmer.

Going into the game, head coach Chad Drummond knew that it would be a tough game. He said that he would be focused on stopping Palmer.

“We’re focused on doing what we do,” Drummond said. “TCA is legit. They are a legacy program and they have years and years of success. We could try to reinvent the wheel and do something other than what we have been doing to beat TCA, but that’s not going to benefit us. So, if you look at TCA their offense runs through number two Cade Palmer. Cade Palmer is a phenomenal football player and he has rushed over 700 yards in the season. He is a monster! Defensively our goal is to stop Cade Palmer. On offense we want to use up the clock because if our offense is on the field Cade palmer won’t be.”

However, in the end, Palmer and the Titans just proved to be a bit too much for Woodland Park. The good news is the recent loss will not slow the team down, as the coach strongly believes in the philosophy of playing the season “one week at a time.”

According to Drummond, the coaching staff goes week by week and looks at what they can improve for the next game. The team’s playoff prospects are still up in the air.

“Honestly I have said the same thing for every game this year, let’s be competitive,” the coach said. “We will let the chips fall where they may at the end of the game. But if we go out and play a great game and we do the best that we can, in the end does the score really matter? If you go out and play your best game and lose, so be it.”

This Friday, the Panthers take on their longtime rival team, the Manitou Springs Mustangs. The Mustangs also are the defending state champions in 2A.

However, this year the Mustangs are not looking too hot with their 2-5 record. And to give the Panthers even more of an advantage, Woodland Park is playing at home. The team is currently undefeated when playing on Panther Field.

According to sophomore quarterback Bryce Broeker, the large crowds at the stands have worked as a “12th man” for the team. “It’s been very helpful for us because first of all, when you have teams coming to home games they are going up in elevation like crazy,” Broeker said. “And then you add the crowd noise and whatnot it’s just awesome. Especially for me it helps my confidence and playing.”

After the Panthers play their last home game this Friday, they travel to La Junta to finish their season.