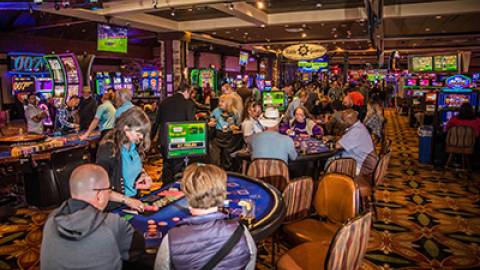 The impacts of this historic time still resonate with us.  For the most part, this gamble  has become a big win for the region.

Limited stakes gaming began on Oct. 1, 1991. It wasn’t the most organized  opening of legal betting with some operators just uncovering their slots seconds before opening time. Only a handful of places opened that famous day, but more came on line throughout the month.

By the first summer, the town actually bustled with more than 30 gaming establishments. Then, of course, the big crash occurred, with the big taking over the small. This is a trend that sill dominates today’s gaming landscape.

The early and pre-days of gambling were wild, capped by weekly marathon meetings, and crowds of 100-plus participants at city hall forums.

I can remember people making their drink and food orders from city hall at the  then Red Lantern Inn,  and crowds moving into this quaint bar/eatery to continue the after-meeting party.  All the problems of Cripple Creek, the world and the future gaming look were instantly solved during those prime occasions.  But oddly enough, the town really came together.

Even then, talk persisted about grandiose plans for hotels and the infamous term destination resort was tossed out.  Cripple Creek leaders actually got the original idea of gaming to transform their dying town from  Deadwood, South Dakota.  But they vowed to do it better.

To say the first few years of gaming were confusing is an understatement. The town sported many lively historic preservation battles, with a clash over a 200-foot-tall flagpole at the then Jubilee nearly ending in a fist fight. The historic preservation director at the time had to be pinned down by three people, after he vowed to punch a casino developer, draped in the American flag, in the face. At times, we were asked to enter the fray physically.

Over the years, the industry has featured many fights and internal battles.

Some of these included

*The fight to combat future Colorado towns from getting limited stakes gaming, includ9ing bids from Manitou Springs, Trinidad and Pueblo.

*The constant marketing squabbles, special events and the push for heritage tourism.  Could never figure out why these subjects caused so much turmoil.

*The dilemma of dealing with anti-gaming governors from both sides of the aisle.  I still say every Colorado governor (Republicans and Democrats) dealing with gaming from the onset has been a problem case. Could never understand their opposition to this industry.

*The consolidation of the industry and the unfortunate death of small casinos and certain retail shops. This is probably the most negative impact of gaming, as we all yearn for the great days of the Black Diamond.

*The uphill and losing battle to fight the smoking ban. Triple Crown and Bronco Billy’s gave it quite a go in the court system, with an impressive bid for cigar bars, but they just couldn’t prevail in the end. The judge was afraid to set a precedent.

*The Great recession and impacts from the Waldo Canyon fires and floods. The constant closures of Hwy. 24 really clobbered the town for several years.

*Efforts to up the ante through raising the stakes, increasing games and forming an entertainment district

*The legal showdowns with the grand villain of limited stakes gaming, Black Hawk. It is kind of easy to bypass historic preservation rules when your ugly town is saddled with no buildings.

*The coronavirus epidemic impact. Enough said on that one.

*The great collection of real characters. The names are too much to list, but a 500-page epic book could be written on Cripple Creek’s assortment of past and current civic leaders and business operators.  The town’s colorful cast of characters could rival any place in the West.

Through it all, Cripple Creek has emerged as a hearty survivor. “We have weathered a lot of storms,” said Interim City Administrator Ray White, when talking last week.

Ray rates the coronavirus epidemic as probably one of the biggest hurdles to confront Cripple Creek throughout the entire history of the district. He admits the smoking ban was bad, but  would rate as child’s play when compared to COVID-19, which nearly wiped Cripple Creek off the  map.

As the town enters its next era,  a resounding boom has occurred with a flurry of new projects and plans. For the first time since slots started ringing, the housing drums are really beating away, and not just in the form of idle talk.

For the first time, the term destination resort, dreamed up after a few beers and cocktails at the old Red Lantern may come to surface.

Enjoy celebrating 30 years of gaming later this week, and let’s give a toast for another 30.