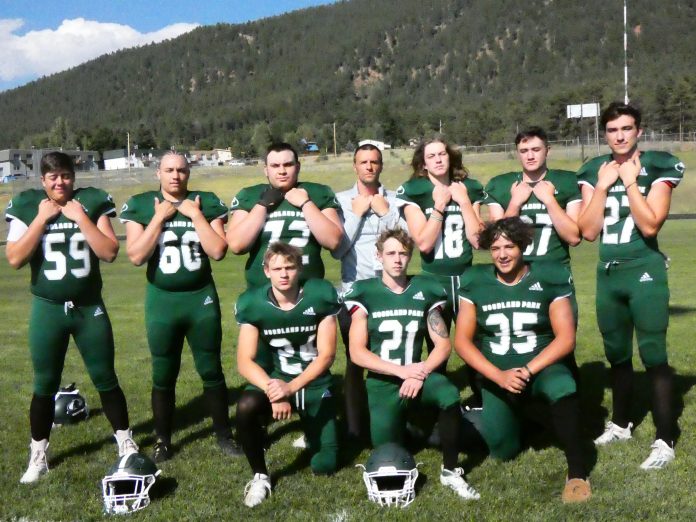 Friday Night Lights Off to a Rough Start

The excitement of Friday Night Lights officially kicked off last week in a normal post-pandemic fashion for the Woodland Park Panthers football team.

Unfortunately, the results brought back memories of what happened in the second half of last year’s COVID-19 season.

The Woodland Park Panthers had spent weeks preparing for their big debut with a new coach and new starting quarterback. The Panthers had sought to operate with more of a run-oriented offense, similar to the tactics used in the past by the Pittsburgh Steelers.

However, the game did not go in the Panthers’ favor from the get go. The struggling team was riddled with mistakes and ended up dropping their first match against the Basalt Longhorns 35 to 6. Ouch.

The Panthers’ struggles began during their first possession after receiving the kickoff. To start the game off, junior running back Aiden Hernandez took a handoff and plunged forward for four yards.

After a successful first play the Panthers’ coaching staff decided to stay on the ground and go with Hernandez again. This time the running back broke past defenders and picked up a first down and then some. Bu  a flag flew during the play and the Panthers were moved back 10 yards due to a holding penalty.

The Panthers were then stuck on their own 14 yard line on a second and 16 play. To switch things up, the Panthers decided to go with a pass this time. Junior quarterback Mason Pyles dropped back to pass as his first time as a varsity starting QB, and it was picked off by Longhorn senior Sam Sherry.

The Longhorns then got the ball deep in Panther territory. After a few plays, Longhorn senior Gavin Webb ran the ball into the end zone from 10 yards out to make the score 7-0.

The bad luck continued for the Panthers during their next possession. On one play senior running back Everett Ellis took a pitch outside but then fell to the ground before being hit by a defender.

The game was then paused for over a half hour due to the injury. After being checked up by the trainers Ellis was then transported off of the field by an ambulance due to a knee injury.

The rest of the game didn’t get much better for Woodland Park as the team continued to stay riddled with turnovers and unnecessary penalties. The Longhorns though, who came into the game ranked fifth in the state, didn’t seem to skip a beat.

Basalt scored again in the first quarter when Sherry caught a pass from first year starting quarterback Kade Schneider. By this point it was easy to tell that the Longhorns had all of the momentum in the game.

Then late in the second quarter Schneider found Sherry in the end zone again making the score 21-0 with halftime creeping up. But then the Panthers fielded the kickoff after the score and broke away for a decent return that almost ended up as a touchdown.

The Panthers then got the ball at the Basalt 10 yard line. Hernandez got the team closer and then Pyles scored six with a quarterback sneak.

But then, the Panthers kicked off with seconds left in the first half and Basalt’s Wilson Maytham showed his skills and burned past Panther defenders for another score. This put the Longhorns up 28-6 at halftime, a hole that was just too deep for the Panthers to climb out of.

During the second half the Panthers just could not get any rhythm on offense and were unable to score. Their defense however stayed tough and only allowed one more touchdown.

Before the game, new Panther head coach Chad Drummond knew the match would be a tough one. He was also worried about how the team would function after sitting on the school bus for a four hour ride.

Luckily, the Panthers will not have to travel as far as they did last Friday for any away game competition throughout the season. Nest week, the Panthers hit the road again to challenge the Elizabeth Cardinals.

The Cardinals will be looking for blood this Friday as they are coming off a close 14-6 win against Burlington on the road. The match this week should be a good game as the Cardinals are ranked #20 statewide and the Panthers sit at #19.