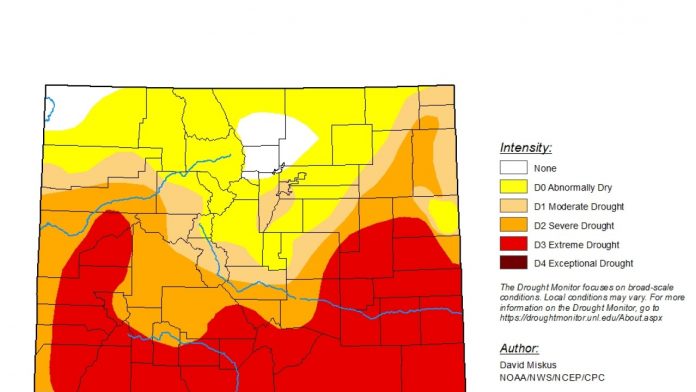 Since mid-May, Woodland Park residents and businesses have confronted Level 2 water restrictions conditions, which can affect their daily and weekly watering habits.

Property owners can only water their lawns so often, and the restrictions impact big commercial users, like the Shining Mountain golf course in Woodland Park. Area linksters will be forced to abide by cart-path-only rules for some time due to the lingering drought and because of the city’s limited availability of H2O.

“We have had to rely on Mother nature a lot more,” noted a member of the SM greens-keeping crew recently

With all the recent rainfall, locals may be wondering why these restrictions are still in place. The story is complicated, as much of the city’s water supply depends on sources some 200 miles away.

Level 2 water restrictions rules can be found on the city’s website at: https://www.city-woodlandpark.org/AlertCenter.aspx?AID=Woodland-Park-under-Level-2-Water-Restri-54

According to Public Works Director, Kip Wiley, “All of our water comes out of the South Platte Basin with the exception of our augmentation water. That comes from Twin Lakes, via the Homestake Pipeline, all the way from Buena Vista to Rampart Reservoir and also Catamount and we have a tap on the Colorado Springs Pipeline that we pull our water out of. And they convey it to us.”

According to drought.gov website, in collaboration with The National Oceanic and Atmospheric Administration, (NOAH) and National Integrated Drought Information System, (NIDIS), no one in Teller are affected by drought at this time. Drought.gov states that May of 2021 was the 24th wettest period in 127 years, at 1.52 inches above normal for Teller County.

However, drought.gov also states that 36.4-percent of Colorado is under a “severe drought” and 30-percent of the state is under “extreme drought” conditions. The western slope of Colorado is where the majority of these “severe” and “extreme” drought conditions exist. The western slope headwater drainages are the major source of the city’s augmentation water.

As a result of the drought conditions on the western slope, On July 1, a declaration of a drought emergency for Western Colorado by Gov. Jared Polis opened up federal and state dollars to help those most affected by the lack of moisture. As of July 1, the US Drought Monitor lists 18 counties as being in extreme or exceptional drought.

Drought conditions are so bad on the Colorado river, that water storage in Lake Mead is at historic lows. Lake Mead, the largest US reservoir, and fed by the Colorado River — fell below the elevation of 1,075 feet. It has hit that mark only a handful of times since the Hoover Dam was finished in the 1930s, but it always recovered shortly after. It may not this time, at least not anytime soon.

Lake Mead is currently 16 feet below where it was this time last year and the reservoir is only 37-percent full.

The second largest reservoir in the Colorado river basin, Lake Powell, is not faring any better.

Lake Powell is down 35 feet from last year and sits at just 34-percent of the lake’s total capacity.

The US Bureau of Reclamation (USBR) forecasts the lake’s levels to continue to decline, without any sign of recovery through at least the end of 2022. If the next major study in August from the USBR projects water levels in the lake will be below 1,075 feet on January 1, it would trigger the first ever shortage declaration on the Colorado river, meaning some communities would begin to see their water deliveries cut significantly next year.

While the recent rainfall may have given some residents a false sense of security, the drought conditions in the state will continue to affect the city’s water supply and that of the entire southwest of the United States.

Wiley, the city’s veteran water czar, has been ever vigilant in obtaining water shares whenever and wherever they become available. Whether these efforts will be enough to continue to keep the faucets flowing and toilets flushing is not in question at this time, but should drought conditions get worse, the shares of water from our augmentation sources could be reduced.