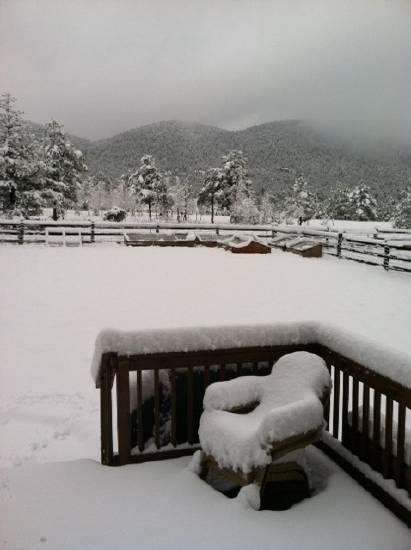 There’s been a lot of chatter lately about the state of our snowfall this year on social media and in the local watering holes. On May 13, Woodland Park began Level 2 water restrictions due to drought conditions.

I’ve been keeping snowfall records at my house just west of downtown Woodland Park since 2005-06 (17 years). It isn’t a scientific measurement, I just measure how deep the snow is on the picnic table in my yard. The following is what I have observed here at my house. And of course, I don’t claim that they match official snowfall totals from scientific sources.

Here are some things I can share from my measurements:

January is the driest month. Over the last 17 years, the average snowfall for the month of January is 10”.

February is historically a month of feast or famine when it comes to snow. The driest February was in 2009 with only 3” of snow, while the wettest February saw 24”.

The snowiest months are March and April. The average snowfall over 16 years for March was 16”. The average for April was 20”.

The wettest winter was the 2006-07 season with 201” of snow. That season we got 45” of snow in October and 58” in December, including a Christmas blizzard. The Christmas blizzard storm lasted from December 20-24, dropping 24”, then a second storm hit December 27-29 dropping another 30”.

As all the locals know when anticipating the first snowfall in the high country, Halloween is the target. The years 2014 and 2016 were the only two years that we didn’t get any snow in October. Oddly enough the 2014 season made up for no snow in October by ending with 117” for the year. The 2016 season on the other hand was dry with only 69” of snow.

The earliest snowfall of the last 17 years was this year. On September 8, it snowed 5”.

The average winter season snowfall over the last 16 years is 83.6” (including this season to date).

This year’s recorded snowfall at my unscientific collection station is 126” so far. The snowiest months, as usual, were March, with 48” and April, with 15”.

Having kept these records over the last 17 years, the fluctuation from year-to-year varies greatly. One year of snowfall of over 100” can be followed by a year of far less.

With all that being said, snowfall in Woodland Park and the South Platte drainage is not the most important factor in the city’s water supply. In fact, Woodland Park’s major sources of augmentation water are from the Arkansas River and Colorado River basins. Both of these drainages are below normal. The Arkansas basin is at 68-percent of normal and the Colorado basin is at 79-percent of normal.

Water is life. Being water wise and implementing conservation efforts should always be a major concern of residents.