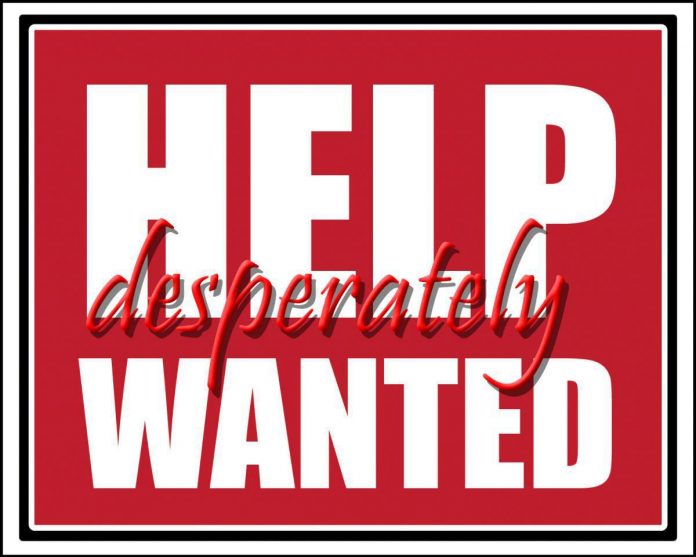 Across the country, many industries are having trouble finding employees. As businesses attempt to re-open after being shut down due to the pandemic, they are struggling to find help.

This crisis has really hit the Teller County and Pikes Peak region, with little mercy, especially with the area’s service, restaurant and entertainment sectors.

The restaurant industry for one has been experiencing a big shortage of people in the Pikes Peak area who are interested in working in the industry. Now that these businesses can legally be open to 100 percent capacity, some eateries are struggling because they cannot find the staff needed to handle the demand.

Many local businesses have discovered it is  much harder to find employees in a variety of fields,  compared to when the pandemic struck the nation. Several types of industries can be seen advertising for jobs. And, just about every restaurant in the county has “help wanted” signs in their windows.

According to Elijah Murphy, the owner of the Historic Ute Inn in downtown Woodland Park, he has definitely felt the sting of the nationwide restaurant worker shortage. “It seems like unless I am offering $50,000-$60,000 a year for employment, I am getting no answers whatsoever,” Murphy said.

Other business owners in Woodland Park have reached similar conclusions, and say it is much harder to find help than it used to be. According to Tanner Coy the owner of Tweeds Fine Furnishings, he has also struggled to find people to fill his retail and general labor positions.

Coy said that a year ago, when he would post a job opening on Indeed.com, he would get 80-100 resumes sent to him in a week period. He recently posted for open positions last month, and he only received a total of six applications 10 days after posting the jobs.

Coy said that the first two of the six applicants that he called did not answer or return his phone calls. He said the second two people he talked to on the phone, he had good conversations with, but both of them were no shows for the interview.

Other industries in the county have had trouble in recruiting talent, including the casino industry. Getting people to work in Cripple Creek has always been challenge, but lately  these pleas for employees have increased to an unprecedented level. Most of the casinos can be seen advertising for more than a dozen open positions in weekly newspapers and on social media.

According to Cripple Creek Interim City Administrator Ray White, the city is also having trouble finding staff and they are currently advertising about half a dozen open jobs. “For example, our police department is down five officers,” White said. “We have five current vacancies that have been vacant for quite some time.”

The city of Cripple Creek is also currently advertising for positions in their custodial department, a police dispatcher, and a heavy equipment operator among others. “We are finding it harder to fill those positions,” White said. “We are not getting interested applicants at the rate that we would normally do prior to COVID. I would imagine that that is probably the norm now across the country.”

According to Deb Miller, president of the Greater Woodland Park Chamber of Commerce, the employee shortage has not been specific to any one industry. “What I’m hearing from businesses across the board. whether it’s in hospitality, retail, the service businesses such as accountants, attorneys and across the board, is that they are not getting any applications,” Miller said. “They are just not getting anything. I heard one business tell me today that they tried for six months and they still don’t have anybody.”

Ways to Help Businesses Grapple With the Problem

As a way to help, the chamber hosted a lunch and learn last week to help businesses learn the different ways available to find employees. Miller also said that some businesses are re-looking at their benefits and incentives packages to try to attract employees. But she said that other businesses have had to scale back the services they offer due to employee shortages.

So, is there a solution to this new problem of recruiting talent? “That’s the million-dollar question and I don’t have an answer,” Miller said.

She did say that some people think that the problem is mainly because workers are staying on unemployment instead of returning to work. So, if that’s the case, things should return to normal in September when federal raises to unemployment benefits end.

Other people, though, seem to think that many of the workers that were laid off during the shutdowns developed more skills and got other jobs. Although the pandemic did shutter some industries other opportunities have opened up including more positions that allow employees to work remotely.

According to Miller, both of these factors have caused the recent employee shortage across the country.

“We have seen people leave industries and been let go and they have gone and taken coding classes online,” Miller said. “And now they are helping with cyber security and they are working from home and they are getting paid really good money to do that. So, they used the available time they had to further their education or change their focus on what they were doing. So COVID has hurt in the respect of letting people go, but they have taken advantage of retraining and then you still have the unemployment issue.”

However, Miller did say that she thinks things will eventually get back to normal. “I believe that before the end of this year we are going to see a readjustment,” Miller said. “I think that as we get enough people vaccinated and we get back to where people can find a day care and children will be going back to school, more will be returning to the workforce. I think toward the last quarter of this year we are going to see a turn in this issue. It didn’t happen overnight and it’s not going to correct itself overnight. It is going to take some time.”