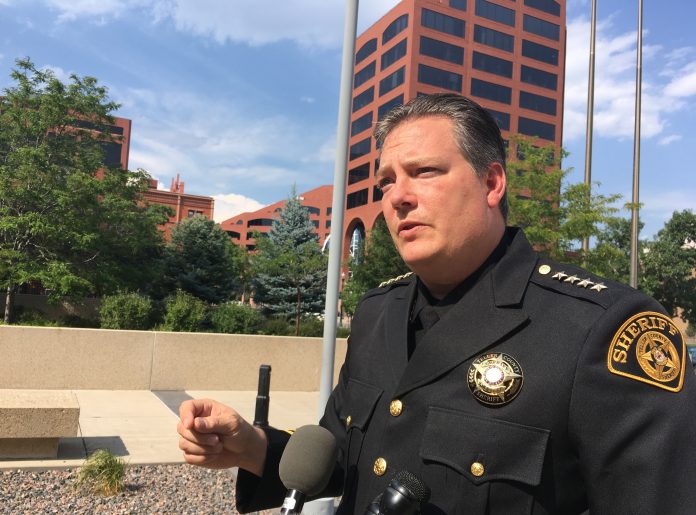 Teller County Sheriff Jason Mikesell hit the media spotlight once again with a television appearance and a bold statement supporting the Second Amendment.

During the hour-long television interview, Mikesell was asked questions surrounding nationwide topics. The interview started with the role of a law enforcement agent during the current political climate of the country.

Mikesell spoke about his background as a lifelong law enforcement officer and admitted that the climate has changed compared to previous years. He cited the increased scrutiny and criticism of law enforcement and figures of authority.

He then went on to discuss why he chose to form the partnership with Immigration and Customs Enforcement (ICE) agency, a stand which has drawn some criticism. He also talked about the legal battles he went through in his battle against the American Civil Liberties Union (ACLU).

The television broadcast focused on a slew of heated subjects. Wommack and Harris questioned Mikesell about several topics including the Second Amendment, the defund the police movement, and the presence of racism in law enforcement organizations.

The sheriff also said that the defunding the police movement and the current political climate has affected recruitment at the local sheriff’s office. Mikesell said that currently recruitment is down 80 percent.

The red flag law in the state, which can eventually enable authorities to take firearms away from those deemed as mentally unstable, via a court order, was another topic that the sheriff addressed.  Mikesell  said he opposed this law because it lacked probable cause. He also said that since the law went into effect,  there have no cases in Teller County where it was used.

During the end of the interview, Wommack brought up The Mountain Jackpot (TMJ) News April Fool’s edition, which featured a spoof story of Mikesell running for governor in Colorado.  Oddly enough, this article, which actually highlighted some of Mikesell’s stand on certain issues, brought about an amazing response from readers and viewers who wanted to donate money to such a campaign. “We had an April Fool’s joke where everybody said Jason Mikesell was running for governor,” Wommack said. “Man, my whole staff got excited and we found out that it was an April Fool’s joke that was put in the paper. Whenever you get ready to run for governor, I’ll support you.”

“Well, I may someday,” Mikesell replied. “But, right now I like being sheriff.”

After Mikesell’s television appearance, he issued a statement on social media promising to protect everyone’s constitutional rights including the Second Amendment. “I believe the Constitution of the United States of America is the backbone of our country,” the sheriff said in the statement. “The constitutional amendments are absolute; they are the building blocks and the very fabric that makes us different from other Countries.”

Mikesell then hinted to the belief that the state’s new gun laws were not constitutional. “The Second Amendment states that ‘…the right of the people to keep and bear arms shall not be infringed,’” the statement said. “Some believe the right to keep and bear arms is not absolute. I am here to tell you, it is. Your right to bear arms is absolute and will not be infringed by my office, regardless of any orders or legislative decrees.”

He was referring to a possible slew of new gun control laws in Colorado, following the mass shooting in Boulder, and even nationwide.