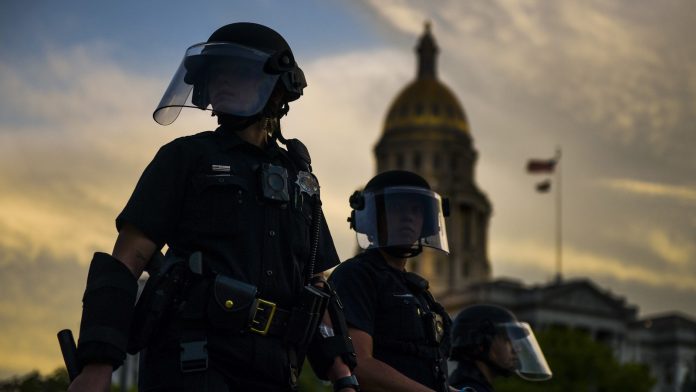 Federal and state lawmakers are both now introducing new legislation to address the touchy subject of police reform, such as law enforcement transparency and use of force.

According to Teller County Sheriff Lieutenant Wes Walter, the recent Chauvin verdict won’t change the local law enforcement atmosphere much locally.  But he said the sheriff’s department is monitoring a new bill that was currently brought to the state lawmakers, which has been heavily scrutinized by local law agencies throughout the state.

“We honor the process,” Walter said.

According to Walter, the new bill HB 21 1250, has recently been introduced to state lawmakers and it adds more mandates from the original legislation, passed last year in an effort to address law enforcement accountability. Walter said that the sheriff’s department will continue to monitor the impacts of the new law, as it makes its way through the state’s legislative process.

Local lawmakers are nervous about new unfunded mandates, and footing the bill for additional restrictions. They contend that local taxpayers could end up as the big losers.

“I know that (Colorado) Representative Leslie Herod (one of the key proponents of the new legislation, who represents a the 8th District in the Denver area), is pushing for more changes and has made comments that the bill passed last year was just the beginning,” Walter said. “Now whether it will pass I don’t know, but I know she is proposing additional legislation at the state level. I’m sure that the fraternal order of police, the chiefs of police, and the Colorado Sheriff’s Association will all have a chance to weigh in on that bill before it is finalized.”

If passed, the bill will clarify when officers must wear body cameras and what footage must be kept. The bill states that officers who are currently wearing body cameras must comply with the requirements of the bill now, and it can’t be delayed until January 1, 2023, as stated in the original legislation.

The previous HB20-217 legislation called for an officer to be permanently decertified if they failed to intervene in a situation where serious bodily injury or death occurred. The new bill now states that an officer will be suspended for one year.

In addition, it expands the level as to which law officers can be civilly liable in court for misconduct. The bill also requires that in case of officer misconduct, the law enforcement agency conduct an investigation, to see whether the officer acted in good faith. Another part of the legislation requires a peace officer to use-de-escalation techniques before using physical force. If physical force is used, it must be “objectively reasonable,” according to the new version.

The Cost of Complying With Police Reform

According to Walter, the biggest problem with this bill, and with HB20-217overall and other related police reform legislation,  is the lack of funding. Walter said that taxpayers would have to cover the cost of at least one more full-time employee and pay for the storage of videos.

“Along with the initial cost to buy the cameras, there is significant money in the storage of all the video footage,” Walter said. “Now you have to pay someone for the storage of all those videos you can’t get rid of. And as those videos pile up you need more and more storage and that is where the real costs come in. I bet if you checked with the Colorado Springs Police Department or the El Paso County Sherriff’s Office, some of those agencies are spending hundreds of thousands of dollars a year just on data storage. I don’t think Teller County would be able to do that without taking away from something else. The new bill is going to add to what videos we have to store.”

After George Floyd’s death, the city of Colorado Springs started the Law Enforcement Transparency and Accountability Commission to propose recommendations to city council regarding law enforcement policies and procedures. According to Walter, he has not heard any discussion from law enforcement officials or citizens that a similar committee would be formed in Teller County.

This issue is gaining momentum nationally. Last week, President Joe Biden, in a televised address to Congress, stressed the urgency of proposing federal police reform legislation within the next few weeks.  This may put more pressure on federal lawmakers to act.

For the most part, issues related to abuse of force in Teller County are very rare. But they do happen occasionally.

In fact, an incident recently made national news regarding a confrontation between a local Marine veteran and three Colorado Springs police officers, and a Teller County sheriff deputy.

Two body camera videos were released that show the officers wrestling local resident Carl Andersen, Jr. to the ground and tasing him twice. The incident reportedly occurred at a Colorado Springs hospital.

Andersen was eventually arrested for resisting arrest and obstruction of justice, but those charges were then dismissed by the District Attorney’s office in late 2019. Andersen has since filed a lawsuit seeking compensatory and consequential damages against the city of Colorado Springs, Teller County, the three Colorado Springs police officers involved and the Teller deputy.