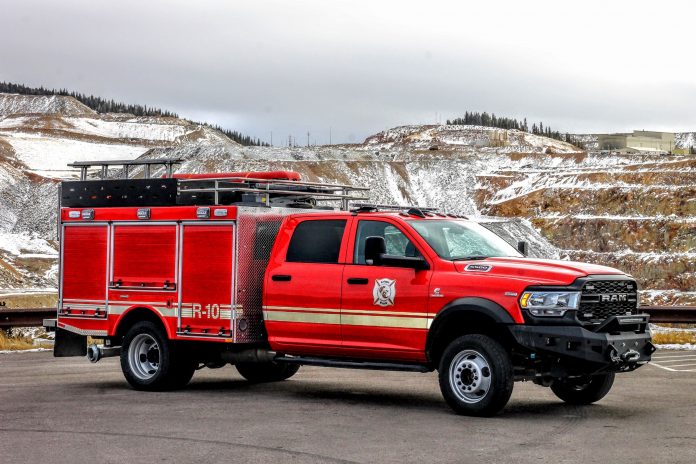 The Cripple Creek Fire Department recently accepted shipment of a light rescue truck built by BFX Fire Apparatus in Weatherford, TX. The purchase of the rescue vehicle was made possible through a donation from Newmont CC&V Mine for $25,000 and a grant from the Colorado Department of Local Affairs for $75,000. The total cost for the vehicle was $171,451. This vehicle will replace the current 1998 Ford light rescue truck.
The vehicle body was built with fiber composite technology and includes LED scene lighting. The lighting features include an 80,000 lumen light tower with 7.5 feet of lift. The vehicle will carry extrication tools and vehicle stabilization struts and air bags for auto accidents. Equipment of for high and low angle rescue operations are also included in the vehicle. There will be medical equipment for responding to both trauma and medical EMS calls. Additional equipment includes hazmat monitoring and response equipment.
Interim Fire Chief, Ryan Lohmeier has already put the vehicle into service. Lohmeier said, “Cripple Creek Fire Department is very appreciative for all involved with the help purchasing the new rescue truck. It replaces our old rescue truck, which was quickly becoming unreliable. The truck has already been put to good use and will better serve the citizens and businesses of Cripple Creek and the surrounding area.”
A dedication ceremony for the new rescue truck was held on Monday, March 8 th at the Cripple Creek Fire Station, 147 East Bennett Avenue, Cripple Creek, CO 80813. Newmont CC&V Mine was recognized for their contribution to the purchase of the vehicle and applauded for their continued civic support for the Cripple Creek community, and the surrounding area.
About CCFD
The Cripple Creek Fire Department was established by the newly incorporated City of Cripple Creek in 1893. Due to the reduced gold production the department was transitioned to a volunteer agency in the 1920’s. After gaming revitalized the City in early 90’s the department transitioned to paid staff in 1993. Currently the department has a staffing level of four per shift. Each of the three shifts is made up of one Captain, one Engineer, and two Firefighters. The Department is led by a full-time appointed Fire Chief. CCFD response area includes everything within the city limits of Cripple Creek and as the first due fire department for the 55 square miles of unincorporated county that surrounds the city and does not have fire protection services.
Jeff Mosher, Marketing & Events Director/PIO