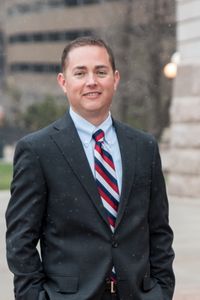 The head law enforcement torch was recently passed from veteran District Attorney Dan May to Michael Allen who assumed the top seat at the Fourth Judicial District, encompassing both Teller and El Paso counties.

So far, the new district attorney has made a few key personnel changes, including naming Martha McKinney as his assistant District Attorney.  His top leadership positions are now evenly split between men and women. He has also added a new animal cruelty division to the DA’s office and named McKinney to head that department.

This department will interest Teller residents and civic leaders, as animal cruelty incidents are on the rise locally, with some horrific cases commanding much attention.

“And we’re are getting pretty far along on getting that unit up and running. That to me is an important area because we can really impact safety in the community. If you have somebody that is willing to commit violent acts on an animal, they are also willing to commit violent acts on a human. If we can stop it before it gets to that stage, that’s a good thing and an important aspect of what we do here.”

Allen said that he is also changing how homicides within Teller and El Paso counties will be handled. In the past, the DA’s office has had a prosecutor on call every day to handle homicides and high-profile cases as they come in. Allen said that he plans to continue the system started by May but make a few key changes.

“What we are changing about it is the way that bigger cases, more demanding cases, and more high- profile cases are being assigned,” the new district attorney said. “I want to ensure that we get the best of our prosecutors with homicide experience assigned to those bigger cases early on in the process. In the past, we haven’t necessarily done that. It was basically that if you are on call and a case happens then that is your case. I want to make sure that we have our most experienced folks ready to go on those cases right from the beginning.”

According to Allen, a major issue facing the DA’s office has always been keeping good prosecutors in Teller County. However, Allen recently hired Robert Willett, the former District Attorney of Alamosa County, to take this top prosecutor spot for Teller. Allen is optimistic about this pick, as Willett has worked and dealt with rural areas before.

Allen also said that he plans to follow the direction taken by May in keeping the public informed on different cases.

“I think now more than ever transparency is an important aspect of what we do in prosecution, policing, and criminal justice,” the DA explained. “And so, we are going to work to be even more transparent in getting information out. And it will be in all kinds of different ways. It will be through press conferences, social media, press releases, and through community interactions. When we get past the pandemic, I intend to be out in the community going to different groups, answering questions and giving presentations on what the prosecution function is all about. I will be doing all of the same things Dan (May) was doing and hopefully a lot more.”

Allen also said that May is currently still employed with the DA’s office in a non-supervisory role. May is only working on one case that happened in 1988. The former DA was the original prosecutor on the case that went cold, but it has been reopened since new DNA evidence was found that pointed to a suspect.

Allen has worked on the prosecution side of court since 2004. Locally, he has handled many high-profile murder and assault cases including one sexual assault case that DA spokesman Lt. Howard Black said at the time was “one of the most horrific assaults I have ever seen.” Black is now Allen’s director of communications and public information officer (PIO).

Currently, Allen is the lead prosecutor on the Gannon Stauch murder case that has seen much attention nationwide. Allen said that he plans to continue having a case load as a prosecutor as well as overseeing the DA office.