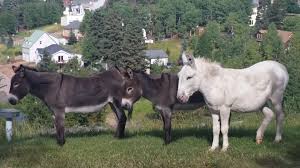 The COVID pandemic and related responses have impacted individuals, families, communities, governments, and business models world-wide.  How businesses succeeded during the pandemic and shutdowns depended on their resilience, creativity, and business model.  Some business models actually thrived such as on-line ordering and delivery companies.  Others suffered greatly due to lack of customers and revenue such as restaurants.  Those effects have also been felt in the small mountain community of Cripple Creek.

Cripple Creek is primarily dependent upon gaming players and tourists for business and government revenue.  The COVID shutdown greatly affected the casinos and subsequently city government.  The shutdown closed the casinos for three months during the 2020 spring.  That meant no business income and reduced city revenue from gaming device fees, lodging taxes, and sales tax.  The relaxing of the shutdown meant the casinos could open to 25% capacity which is still the case, but that did not generate much city revenue.

With a greatly reduced revenue, the City needed to tighten its budget to the smallest in over 25 years.  This forced them to primarily focus on essential services—police, fire, public works, and basic city government functions.  The reduced budget, among other things, resulted in the city laying off some personnel with the city administrator and fire chief positions remaining unfilled today.  The city announced a shift in their historic support of city events by off-loading that work to non-profit organizations run by local volunteers.  The first impact was to the Two Mile High Club that supports the city’s donkeys largely from funds generated during the Donkey Derby Days scheduled for June 2020.  The short time-line and large work load to manage vendor applications, booth assignments, power, audio, portable toilets, and a myriad of other needs sent a shock wave through the volunteer organization with a meager budget.  They valiantly responded, but the event was cancelled by the City due to the COVID restrictions.  Subsequently, other summer events were cancelled for the same reasons—no money, the risk was too high for both the community residents and businesses to bring thousands of outside people into the city, possibly having a COVID outbreak, and jeopardizing having businesses totally shutdown again.

This was also the case with the Salute to American Veterans Rally and POW/MIA Recognition Ride.  The rally and ride, traditionally held the third weekend in August, honors veterans for their sacrifice and service and brings in thousands of participants from throughout the country including recent bikers from Sturgis, SD.  The city council heard testimony from the rally organizers (ProPromotions owned by Jim and Pam Wear); other interested individuals; and, American Legion Post 171 officers who supported the rally being held.  The city council decided the risk was still too high and cancelled the event as they had done with all the preceding summer events.

The event business model was obviously not working for several reason—the city did not have the revenue and staff to sponsor the large events, the assembly of large crowds wouldn’t be safely approved during the pandemic, and the small volunteer base of each community organization could not take on an event by themselves.  The concept of the “Gold Camp Association” (GCA) was pushed forward to loosely organize the local non-profit players, pull their volunteer resources together, look for creative ways to run an event on virtually no budget, and safely bring visitors to Cripple Creek.  The GCA currently consists of the Two Mile High Club, Teller Rifles, Victor-Cripple Creek American Legion Post 171, and Post 171 Riders.

The first test of this concept was in late September and early October 2020, when the Aspen Tours were held.  The plan was to keep visitors in their cars for a driving tour of the area with maps, tour stops, hosts at each stop to describe the scene, a final stop in town for refreshments, and safe visits to local establishments.  The GCA was successful in raising $8,000 for the care of the donkeys during the winter with almost no expense.  The Gold Camp Association is looking to expand their membership and host larger events in 2021 such as Donkey Derby Days, a patriotic, family-friendly, Independence Day celebration, and Aspen Tours in the fall.  Their focus is to work for the town’s financial survival, keep the revenue in town, and benefit the community and local businesses.  Contrary to rumors on social media and other sources, the GCA is not opposing the Salute to American Veterans Rally, the POW/MIA Recognition Ride, or any other event officially sanctioned by the City.

In summary, times are changing.  A business is greatly affected by their business model, resiliency, and creativity during a pandemic shutdown.  The former models that rely on generous government sponsorship and large assembled crowds don’t currently work very well, if at all.  Creative events with dispersed and distributed crowds have an increased chance of success.  Let’s all work together to make the new model work for the future of Cripple Creek.