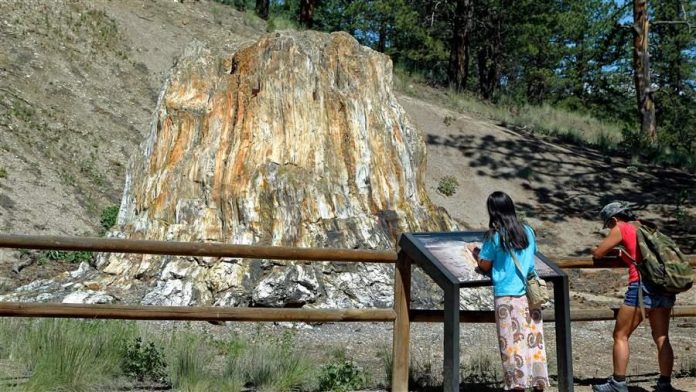 A collaborative effort, capped by much lobbying from national, state and local leaders, has finally reached the finish line.

And for a change, it has produced a dose of needed positive news for the Florissant Fossil Beds National Monument, one of Teller’s main tourist attractions. The Fossil Beds, located off Teller One, has been bombarded by challenges, courtesy of the coronavirus epidemic and earlier government shutdowns and threats. National monuments, as a whole, came under fire during the Trump administration, which scrutinized many of these protected land areas.

The Florissant Fossil Beds, though, will see its park boundaries grow.

On December 21, the National Park Service closed on a 280-acre donated parcel at Florissant Fossil Beds National Monument. This addition creates more access to address wildfire mitigation on the western side of the monument and provides additional montane habitat.

According to a press release issued by the  National Park Service late last week, this donation was made possible through the generosity of the local landowner and by way of Congress through the John D. Dingell, Jr. Conservation, Management, and Recreation Act, passed in 2019. This act featured more than 100 individual bills and set the stage for expanding the size of Death Valley and Joshua Tree national parks, and creating a monument honoring civil rights icon Medgar Evens in Mississippi and  Mill Springs Battlefield National Park in Kentucky, just to name a few of the enhancements.

The bid to expand the Fossil Beds was frequently touted by Teller County Commissioner Norm Steen, who once testified before Congress to help secure the deal. Congressman Doug Lamborn also endorsed the effort. The expansion, made possible by an anonymous landowner, who donated the nearly 300-acre area.

But in order for this to move forward, the land expansion of the Fossil Beds had to get approved by the U.S. Congress.

The Fossil Beds, known for their rich fossil resources,  has a unique history, which was highlighted during the Fossil Beds’ 50th-year birthday bash, celebrated in August 2019. The Fossil Beds Monument, according to National Park Traveler, “nearly became an A-frame housing subdivision.  The monument was saved by a grassroots group called the Defenders of Florissant and a precedent-setting legal team.  Together, they succeeded in convincing a federal court to file an injunction to stop the developers’ bulldozers long enough for a bill to be passed and the president to sign it.”

Several of these champions of the  movement to create a national monument in Florissant attended the Fossil Beds’ 50th-year anniversary.

The Fossil Beds National Monument was officially started in 1969, via a bill signed by former President Richard Nixon.

It is regarded as one of the county’s premiere attractions, bringing in nearly 100,000 visitors a year.

The Fossil Beds, though, has experienced its share of challenges in the last few years, mostly dealing with government shutdowns, federal campaigns against national monuments and the coronavirus epidemic. According to the county’s coronavirus website, the Fossil Beds Monument is listed as an active outbreak location, meaning that at least two positive cases  have been traced to their facility. But this list is quite extensive.

According to the Fossil Beds’ website, all of its 14 miles of trails and its main outdoor resources are open to the  public. Some of the indoor facilities, including their exhibits and theater, remain closed. The visitor center lobby and gift shop are open now from Wednesday through Sunday.