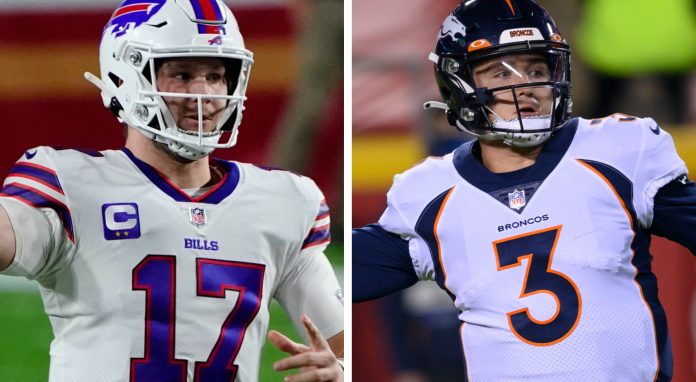 Whoa! The Broncos pulled out a road win in Carolina last, week 32-27 last week. This was the third time in 14 games that the Broncos scored at least 30-points.

It was the best game of Drew Lock’s young career. Lock was 21-27 attempts for 280-yards, and four touchdown passes. AND, wait for it…NO interceptions.

Enough about last week. We’ll take the win. But wait, one more thing. The Broncos are 3-4 on the road and 2-4 at home. Without fans in the stands, home field advantage and Mile High Magic ain’t what is used to be. One more fact: The Broncos have two more home games, the Bills next week and the Raiders on January 3, 2021. Beating the Raiders would be a great way to usher in 2021 and put an end to this miserable excuse for a year, 2020.

Which brings us to next week. The Buffalo Bills come into Denver looking for their second trip to the playoffs in a row. Last year the, Bills lost their wild card playoff game against the Houston Texans 22–19 in overtime after giving up a 16–0 lead.

Before last year’s trip to the playoffs, the Bills possessed the longest active playoff drought in any of the four major professional sports in North America: they did not qualify to play in the NFL playoffs from 1999 until 2017. In 2017, they lost the wild card game to the Jacksonville Jaguars.

But, au contraire, the poor Bills are in the AFC East Division. This once festering scab of a division includes the Miami Dolphins, New York Jets, and the once dominant wolf of the NFL, the New England Patriots.

The Patriots controlled the AFC East, behind the duo of Bill Belichick and Tom Brady, for a decade. Now king Brady is gone and the rest of the AFC East is more competitive. Both the Dolphins and the Bills have sent the Bradyless Patriots packing. The Bills now sit atop the AFC East with a 10-3 record.

With all the losing seasons the Bills have suffered, they were perennial candidates for a high draft pick. They hit the jackpot when they picked Wyoming Quarterback Josh Alan at the number 7 pick in the 2018 draft.

Alan took a couple of years sitting on the bench behind quarterbacks, Tyree Jackson and Derek Anderson. Both of those guys didn’t help the franchise much. In 2018 Anderson and Jackson finished taking turns failing. The Bills went 6-10 in 2018.

You should get excited about how great Allen and the Bills are. This year, though they’ve had a pretty easy schedule. They lost to the Titans, Cardinals, and Chiefs. That’s not to say they’re a bad team. They beat the Seahawks, Raiders, Rams, Patriots. /and last week they beat the red hot Pittsburgh Steelers, 26-15. Their other wins came against lesser teams, the Chargers, Jets, Dolphins, and 49ers.

Allen’s favorite target in the passing game is Stefon Diggs. Diggs is already over 1,000-yards for the season and has an impressive 11.5 yards-per-catch average, and 4 TDs.

So. What’s it all mean for next week?

Allen likes to throw the deep ball. With the Bronco’s suffering injuries to almost their entire defensive backs, this will be trouble for the Broncos. He also likes to run and does it well.

TMJ Pick: The Bronco defense is playing lights out, but they’re no match for the Bills’ explosive offense. Even if Lock has found his mojo, it won’t be enough to win this one. Bills win 31-21.