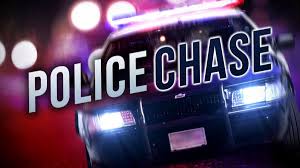 Teller County Sheriff deputies arrested a dangerous felon and former prisoner on the run last week, after he led multiple police departments on a wild chase, and even fired at a police officer from another agency.

Luckily, no officers were injured during the pursuit.

The incident started late last month when the Canon City Police Department tried to pull over the suspect, who was on parole, for a traffic stop.

The suspect then led officers out of town when he crossed into the Teller County line. After running from the police chasing him for a decent amount of time, the suspect parked his car on the side of the road and then ran on foot into the woods.

The Teller County Sheriff’s Office was then called in to assist and followed the suspect into the woods. The deputies were eventually able to apprehend and arrest Chancey Colwell, 36, of Cotopaxi, Colorado on Nov. 24, and book him on multiple felony charges.

Once apprehended, police learned that Colwell had multiple warrants out for his arrest which may have been why he tried to run. The police also found Colwell was in possession of a firearm and controlled substances.

During the chase, luckily no officers were injured. Colwell, however, did sustain minor injuries during his apprehension.

Colwell was booked into the Teller County Jail shortly after the incident and was charged with second degree attempted murder, reckless driving, possession of a weapon by a previous offender, vehicular eluding, resisting arrest, first degree criminal trespass, failure to drive in a designated lane, failure to stop or yield, possession of a controlled substance with intent to distribute, and three failure to appear outstanding warrants. The suspect still sits in jail on a bond of nearly $57,000.

However, getting arrested, running away and assaulting police officers was not new for Colwell. In December 2015, Colwell was arrested for assaulting the police chief in Florence and spent some time in prison for his crimes.

That incident started when Colwell was identified to the Florence Police Department as a shoplifting suspect. Florence’s Police Chief at the time Mike DeLaurentis started looking for the suspect until he was found at a Florence gas station.

As the police chief approached Colwell, he ran from him and led DeLaurentis on a chase on foot. Then, Colwell stopped and picked up a metal bar that was part of a display case and came back towards DeLaurentis.

“He lifted it shoulder height and approached me in an ‘attack mode,’” DeLaurentis said in court in February 2016. “He got into a fighting stance.”

A struggle then ensued between Colwell and the police chief when the suspect got hit in the stomach with DeLaurentis’ taser. DeLaurentis also got hit in the arm with the taser and hyperextended his right arm during the struggle.

Colwell was arrested after the chase and fight and charged with several crimes including first degree assault of a peace officer, second degree assault, possession of a controlled substance, criminal mischief, resisting arrest and theft. During his court date in April 2016, Colwell took a plea deal and pleaded guilty to second degree assault and the drug charges and as a result all of the other charges against him were dropped.

Colwell was then sentenced to a total of four years in prison with two years of parole afterwards. The judge sentenced him three years for the assault and then one more year in prison for the drug charges.

It is most likely that Colwell had just recently been released from prison after serving the majority of his four-year sentence. The nature of his outstanding arrest warrants suggest that he was out on parole during the incident but he had not complied to the conditions of his parole or showed up for the related court hearings before being arrested in Teller County.