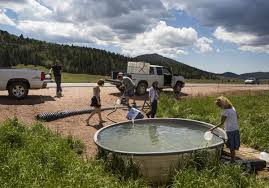 If the Gillette Flats Spring group is seeking a financial rescue package in an effort to craft a long-term water solution in preserving a historic well, then the city of Cripple Creek isn’t the answer.

That’s the word of key city officials and leaders.

“It is not a city issue,” blasted Interim City Administrator Ray White, in an interview last week. “I don’t know where this blame game started. It really is a state issue.”

White was responding to comments made at an earlier community forum in  Florissant, sponsored by state Representative Mark Baisley.  The  meeting was promoted as a forum to discuss the  pharmacy needs of the Florissant area, with the closure of the Mountain Key outlet due to pending criminal charges against the business pharmacist, Brent Stein.

But instead, it mostly turned into a lobbying cry from the Gillette group, who urged community members to contact city officials and leaders of Cripple Creek and demand 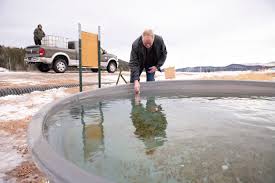 assistance; and specifically, to secure a certain amount of augmentation water.  A number of fingers were pointed at Cripple Creek, as the main culprit for not stepping up the plate. In fact, one group representative accused the city of establishing road blocks to halt the group’s effort to finalize a water agreement.

The city administrator and Councilwoman Meghan Rozell, though, stanchly deny these claims.

“We do not provide augmentation water to this source,” said White, who believes the group would be better off contacting anther water entity, such as Mountain Mutual.  “Nothing could be further from the truth,” added Rozell, in replying to concerns about the city not trying to offer a helping hand to area residents who use this spring.

The Gillette Flats spring in question is located off Hwy. 67 and has been used as a water source for hundreds of residents for decades, as well as serving as a tourist attraction. A common site in Gillette features residents pulling off the main highway and loading up their bottles and tanks with water from this spring. The spring stems back to the late 1890s.

Group members contend they are so close to reaching a final long-term solution, but need a certain amount of donated H2O or water to purchase from the city of Cripple Creek to replace what is taken from users of the well. The group does face a deadline at the end of this month from the state.

City officials and elected leaders, though, contend they are not in the position to satisfy this request. White said it wouldn’t be fair to local city residents to just pay thousands to bail out the Gillette group. He also indicated other legal hurdles.

He said the city has already invested several thousand dollars in legal fees to investigate the group’s claims. Gillette Flats Spring members made a presentation to the city council in August, and received a somewhat lukewarm response. Elected leaders supported the group’s mission, but maintained they do not have legal jurisdiction over this issue.

In addition, with the coronavirus epidemic raging, White stressed that the city is facing its toughest budget in 25 years. He cited the limited resources they have.

Members of the Gillette group may address the council this week.  But it is not listed as a regular agenda item.

The Gillette group, which has succeeded in gathering 2,000-plus signatures, in an effort to keep the spring open, has gotten the attention of Representative Baisley. Baisley who was re-elected to the state House on Nov. 3 by a substantial margin, has tried to assist the residents.

The group has succeeded in obtaining much popular support in their crusade to preserve history and keep the spring open. But it’s been a tough battle in the legal and water arena.  The battle lines were drawn in 2018, when the state threatened to shut the historic well down due to drought-related concerns and issues over water rights.

Since then, an active citizens group has been formed to keep the well open.

According to group representative Kirt Huffman, the organization has exhausted all of its deadlines and must come up with a final water replacement plan by the end of the month.  A key element of this involves proposed water replacement from the city of Cripple Creek, according to Huffman.

The group has already secured a nonprofit entity, Faith Fellowship Church, to assist them in their efforts.

City officials say they support the group’s cause and sympathize with the plight of spring users, but they contend Cripple Creek can’t legally assist the group.  Rozell stated that the city may support any effort to extend the deadline with the state, but that’s as far as the city can go.

“The state created this problem,” admitted White.  “They should play a larger role in fixing it.”