Early voting fever has entered new extremes in Teller County and throughout Colorado, as Election 2020 enters the final stage.

As far as any concerns about voter interest or possible apathy, these worries have been shattered with a presidential election that has attracted massive attention.

The only real question: When will election results be affirmed?

Today (Nov. 3) marks the final time for voters to drop off their ballots or actually cast tallies at a certified vote center. The sole vote center in Teller is located at the Woodland Park Public Library. However, three drop-off boxes are still in play until 7 p.m. this evening. (These are located outside the county courthouse in Cripple Creek, the motor vehicle office in Woodland Park and the Divide Venture Foods outlet in Divide.)

The vote pace for the 2020 presidential election locally and statewide is unprecedented. Of course, much of this is attributed to a heavily contested council race in Woodland Park, a 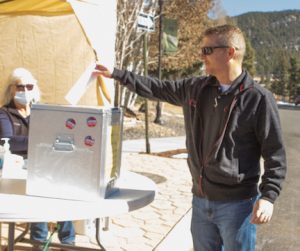 slew of ballot questions with big impacts, and dramatic presidential and U.S. Senate contests that have turned into  mudslinging duels.

By early Friday morning, Teller County, according to the Colorado Secretary of State’s Office, had recorded close to 12,000 return ballots, out of  18,966 active voters. On a statewide basis, we had already generated nearly 2.3 million returns out of a registered voter list of about 3.8 million.  Not too shabby, say election experts. With these trends, a turnout record is in the making both locally and in Colorado.

“We are definitely going to do better than what we did in the 2016 election,” said Deputy Teller County Clerk Stephanie Kees. “It is very exciting We are having a great turnout.”

In the 2016 election, Teller recorded a 68 percent turnout.

The deputy clerk said election officials have encountered no real hurdles or conflicts. “People are behaving themselves very well,” quipped Kees. “We have had no problems.”

That’s not the scenario in many parts of the nation, plagued by long lines, reports of voter intimidation, lawsuit threats and short tempers.  But luckily for Teller and Colorado, the mail-in voting process has been used since 2013. Moreover, it has been widely accepted by leaders of both major parties in Colorado.

Although most Teller voters dropped their ballots off at designated box locations or in-person at the clerk and recorder’s office, the county experienced a great surge of people using the vote center in Woodland Park, allowing electors to vote the old-fashion way.  By 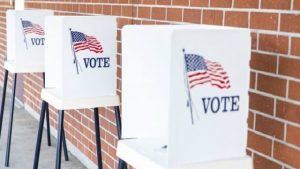 The center also featured an outdoor tent, funded by the Focus in the Forest group, to help accommodate voters. A real challenge with the vote center has dealt with the coronavirus restrictions, only permitting so many people to access the center at one time.

As expected, vote trends in Teller are following party lines. Republicans led the charge in the early voting process in Teller with close to 5,500 tallies cast by Friday morning. Dems in  Teller recorded close to 2,100 tallies and unaffiliated returns hit the nearly hit the 4,000 mark.

These same percentage levels were similar in El Paso County.

But they clashed with state statistics, indicating the blue turn of Colorado. In the early voting stats, Dems recorded 789,595 votes by the morning of Oct. 30, while Republicans had cast 634,839 votes. But the big winner statewide has been the unaffiliated voters, who recorded 826,203 return ballots by Friday morning.

These statistics run parallel to party affiliation, as unaffiliated electors (known as Independents) now  reign as the leading voting block of electors in the state. Throughout Colorado, and due to the growth of urban areas, such as Denver and Boulder, Democrats outpace Republicans.

The GOP, though, has a staunch base in El Paso and Teller counties.  But with this predominance of GOP voters in the region comes the pressure of having to generate a 60 percent favorable rate among their candidates to win key races in Colorado.

Local voters associated with any of the two major parties reported a record amount of text messages and phone calls from GOP and Democrat regional volunteers and officials, urging them to return their ballots as soon as possible.

Despite the controversy over this election, Kees believes all Teller ballots (through early voting and ones cast on Nov. 3) will be counted this evening.  Of course, provisional and overseas votes won’t be tallied, but that doesn’t amount to a huge number locally.