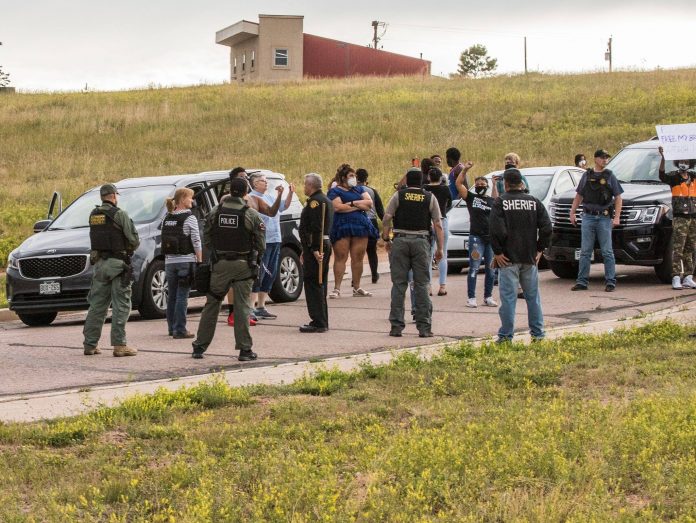 The tide of protests occurring across the nation now has infiltrated Teller County, with a fight erupting last Friday between ICE (Immigration and Customs Enforcement agency) protesters and supporters of the sheriff’s department.

No arrests or serious injuries occurred as law officers broke up the dispute. But not before a volley of verbal gunfire was exchanged between the two groups.

A group of protesters organized a demonstration in Teller County due to the sheriff’s strong partnership with the ICE agency, and to ask for the release of nine inmates being held on ICE holds.

The protest started out peacefully, but then towards the end of the rally, violence erupted when a group of citizens supporting the sheriff’s department, clashed with the protesters.

Before the protests were scheduled to take place, the Teller County Sheriff’s Office released a statement on social media and to local news outlets, saying that a group of protesters 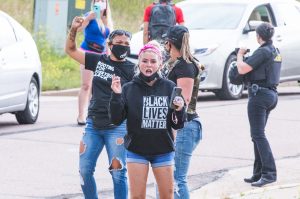 were heading to Woodland Park, and then to the jail in Divide to demand the release of ICE detainees.

“Teller County Sheriff Jason Mikesell would like to remind everyone that, as always, we will protect the community,” the statement said. “While supporting peaceful protests, Sheriff Mikesell has zero-tolerance for any criminal behavior including blocking of roadways and/or throwing any objects.  If this activity presents itself, any and all violators will be prosecuted to the fullest extent of the law.”

According to Teller County Sheriff Commander Greg Couch, the information was sent out to warn the protesters that violent actions would be prosecuted. “The group that organized that protest had also put out a press release and so us not knowing who that group is, and the fact that they had never been up here before or contacted us,” Couch said. “We wanted to assure the people that were coming to protest that there would be a zero-tolerance policy for any criminal acts. So, basically we were trying to set the ground rules for people who came up here to protest lawfully.”

The protest started when a group gathered at the Ute Pass Cultural Center in Woodland Park Friday evening. The group rallied cars together and then they all drove to Divide to protest in front of the county jail.

While in Woodland Park the protesters said that they intended to make the demonstration a peaceful protest, and no violence occurred while they were in Woodland. According to a 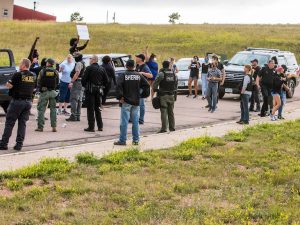 spokesperson for the group, Nayda Benitez, the people gathered to protest for the release of all nine of the ICE detainees, and to speak against the sheriff’s partnership with the federal immigration agency.

The Teller Sheriff’s Department is the first agency in Colorado to partake in a federal program with ICE, allowing a few of their deputies to serve as federal officers in a plan to crack down on possible illegal-immigrant inmates at the jail.  The agency also has had its run-in with the American Civil Liberties Union over matters pertaining to ICE holds and related illegal immigration issues.

“Today we are here in support of the nine immigration detainees at the Teller County Jail,” Benitez said.

“They were recently transferred from the Aurora immigration detention facility to the Teller County Jail. Specifically, we are here in support of Pablo Grijalva and we are here with his family, his U.S. citizen wife and his seven-year old daughter. They have been fighting for his release for six months. This transfer further isolates him from his family. We do not understand why that was done and we do not support it. We are really urging them to transfer him back to Aurora so that he and his family can continue fighting his case.”

Once the parade of decorated cars left, they headed to Divide where the roads around the jail were blocked off and several people were out in support of the local sheriff’s department, and had signs  indicating their support. At about 7 p.m. a fight broke out between the two groups, but it was quickly broken up by sheriff deputies.

According to Couch, no arrests occurred that were related to the protest that night. “No one was arrested although some people said that they wanted to make a criminal complaint and they were directed to another area where we could take that information,” the commander said. “But they declined to come over and give us the information to make a complaint.”

Couch also said that the sheriff will continue his relationship with ICE for as long as he is legally allowed. The only way the ICE detainees could get released, according to Couch, is if a new law requires that action.

The commander did say that besides the one fight, there were no other violent or criminal incidents that took place during the protest. “The sheriff just really loves the citizens here and enjoys such great support from our folks in Teller County,” Couch said. “And we were appreciative of them showing their support and we hope to continue to enjoy that support.”