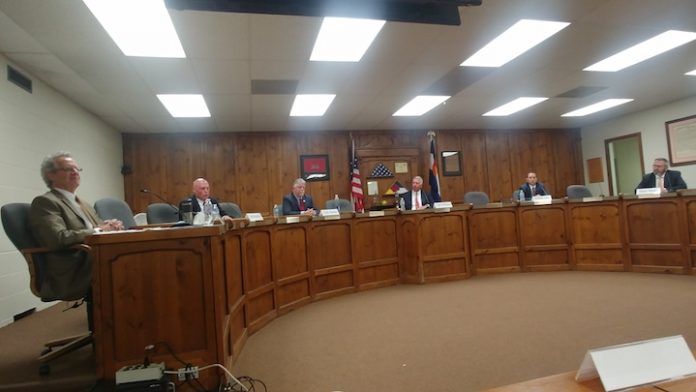 Gloves Come Off Over TMJ Question on Retail Marijuana

During a candidates’ forum last week, no heavy verbal punches were thrown at least at first, with the county commissioner contenders agreeing on most issues and displaying a fairly amicable tone.

But the gloves came off later in the evening, with the District Attorney candidates taking serious jabs at each other, after responding emotionally to a question surrounding the legalization of retail marijuana posed by TMJ News, and in their closing remarks.  It became clear that the two GOP DA contenders won’t be exchanging Christmas cards anytime soon.

Last Wednesday, The Greater Woodland Park Chamber of Commerce sponsored a candidates’ forum as a prelude to the summer primary election, scheduled for later this month.  The event was led by Chamber President Debbie  Miller and former Woodland Park Mayor Pro Tem and Councilwoman Carrol Harvey was the forum’s moderator.

The forthcoming primary election will basically decide who will serve as the next two commissioners in Teller County next year, and who will become the next district attorney, due to the predominance of the Republican Party in the area and region.

The meeting was held at the Woodland Park City Council Chambers, and a small group of less than 20 people attended live. The meeting was also available online via Zoom, and more than 50 people tuned in to watch the candidates introduce themselves and answer a series of questions.

When asked what they planned to accomplish, Mella brought up the Hwy. 24 relief

route, forest management, and improving public and private housing options. Stone mentioned that he has formed a coalition of county commissioners across the state to help counties address state issues, and he plans to focus on wildfire mitigation.

Williams said that he was concerned about the future, and wants to find ways to stop residents from being forced out of the area due to rising housing prices. Rusterholtz said he wants to focus on protecting freedoms and improving traffic.

When asked about the current state regulations regarding the coronavirus pandemic most of the candidates took similar stands. They believe that the regulations were too strict since the county never saw big numbers of confirmed cases. The candidates applauded the current commissioners and agreed with the steps they made to apply for variances at the local level.

This amicable spirit, though, ended, when the DA candidates took the stage.

District Attorney candidates Allen and Waller introduced themselves in the beginning and then they were asked questions relating to officer-involved shootings and their opinion of specialty courts. Allen described his experience with the Fourth Judicial District as a senior deputy district attorney under current DA Dan May. Waller highlighted his experience as a prosecutor for the military in Iraq and his stint as a prosecutor in Pueblo.

During the questioning, the candidates each stressed their experience as prosecutors in different realms and answered most of the questions in relatively the same way. Emotions ignited, though, when the two candidates were asked by TMJ News their position on legalizing retail marijuana in local communities, and what other crimes could increase as a result of opening the door for retail cannabis.

“Teller County voters can do what Teller County wants to do but I would not be a big fan of legalizing marijuana in Teller County and I have certainly not been a fan of legalizing marijuana in El Paso County because here’s what happens: Drug lords and cartels have figured out that it is easier to grow marijuana here in the United States and then illegally ship it across our borders to other areas of the country than it is to sneak across the border somewhere,” Waller said. “That has created situations where we are now trafficking marijuana. When we traffic marijuana, we end up trafficking other things as well that includes illegal narcotics, illegal weapons and in the worse cases human beings. Until this gets figured out at the federal level, I would not at all support any kind of legalization in El Paso or Teller Counties. We have just seen too many devastating impacts in our communities and we certainly don’t need more drug lords and cartels here in our communities.”

“I think that the people in each jurisdiction should get to decide whether they have legal retail marijuana or not, but I can tell you that I am absolutely against legalization of marijuana but I can also tell you that it is here to stay we are not getting rid of it because it is part of our constitution now thanks to the amendment a few years ago,” Allen countered. “I have been personally involved in prosecuting marijuana grows that have been conducted by cartels especially here in Teller County. What we saw in those grow operations was that they would bring in shifts from Cuba to Teller County to man the grow, and then they would stay here for a little while and then they would ship them back and bring in the next crew. When we busted those crews here in Teller County, we actually caught them in the middle of a shift change so we had one crew leaving to the airport at DIA and another crew coming in to take over. Those people were victims of human trafficking. They weren’t the ones reaping the benefits of legalized marijuana or these cartel-grow operations. I’m absolutely against legalizing marijuana and dropping down charges on these other drugs and decriminalizing them.”

The DA candidates brought their emotions into their closing remarks when they both struck low blows at each other.

“Here’s where politics should never come to in the district attorney’s office, it should never be used for political gain,” DA hopeful Waller said in his closing speech. “I have had some pretty significant experience with this in recent times. There is a convicted felon from Colorado Springs named Doug Bruce (the author of the Taxpayer Bill of Rights and a former El Paso County commissioner who has had frequent conflicts with elected officials) who recently filed a complaint against me with the District Attorney’s office and he did that in collusion with a Colorado Springs City Council member and he also did it in collusion with my opponent’s campaign and particularly his campaign manager. The criminal justice system should never, ever, ever be used in these kinds of circumstances in these situations where it is weaponized for political gain and I’ll promise you that when I am district attorney that will never happen.”

DA candidate Allen listened to Waller’s speech with a straight face until he decided to end the bout with a right hook punch.  “One thing I am going to say is that when you start throwing around the words ‘collusion’ you sound like Nancy Pelosi and Adam Schiff, do you want to be in that company?” Allen said in a stern tone. “Let’s get real okay. Evil never rests and the best defense against those who choose to do evil in our community is professional prosecutors dedicated to holding them accountable. There are some that want to make this a political seat which is a dangerous game. The safety of our families is not a political game.”