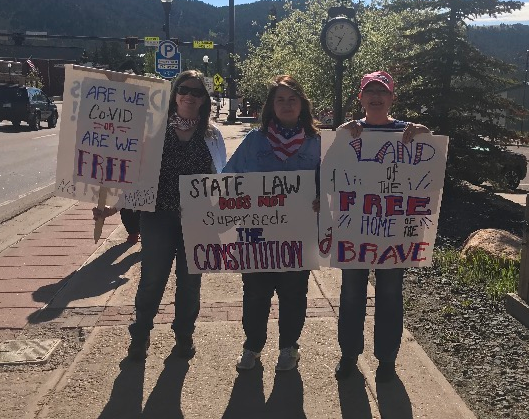 For the third weekend in a row, protesters gathered at Bergstrom Park in downtown Woodland Park to voice their outrage at what they perceive to be a violation of their constitutional rights, and to advocate for the reopening all businesses in Teller County.

Their target:  Governor Jared Polis and the state government’s staunch coronavirus restrictions.  Protesters maintain that these safe-at-home and safer-at-home orders violate the constitution and would have our founding fathers up in arms.

The first two events drew a large crowd who held signs that read, “Land Of The Free, Home Of The Brave,” and “State Law Does Not Supersede The Constitution,” However, only a handful of people were present at last weekend’s event.

But last weekend’s sparse attendance could be due to the fact that the state is starting to loosen up its restrictions against businesses reopening.

However, that didn’t deter from the spirit of local protesters.

Leslie Vail, who is one of the event coordinators said, “We want to have four weeks of this. I believe we just need to have a presence here to let people know we really mean business, we’re not just a flash in the pan. That we’re here to take back the ground that they are trying to take from us.”

When asked what she thought of Governor Polis granting Teller County’s application for exemption from some of the shut-down orders Vail replied, “He didn’t have the right to put any of those (orders) on. After the numbers came down it should have open. I would say he’s against the constitution. A little freedom is not freedom.”

Vail agreed that sick people should stay home, but quarantining everybody is too far a step.

When asked about the possibility of a second wave of the virus if tourists are allowed to come into town, Vail replied, “Hydroxychloroquine.” She cited Dr. Anthony Fauci’s study with Hydroxychloroquine in 2005 to combat the SARS outbreak. She said, “It attacks it. 75-percent of COVID-19 is SARS, it kills it. But Dr. Fauci is now poo pooing Hydroxychloroquine.”

Her comments ran parallel to public statements Vail made at last week’s regular county commissioners meeting in Cripple Creek. Vail urged the commissioners not to succumb to the state’s fear tactics during time reserved for public comments. “That is tyranny,” said Vail, at last Thursday’s commissioners meeting, in describing the state’s restrictions. “People are afraid of the government. We need to challenge the state…We are in a tyrannical state. There is no need for a state of emergency.”

Last Saturday also saw a small event to celebrate getting back outside. Merry Jo Larsen, owner of the Cowhand store and Chairperson of the Downtown Development Authority (DDA) organized the event.

The event was sparsely advertised so that it did not attract to large a crowd and make it difficult to maintain safe social distancing. Larsen said, “We didn’t want to risk having too many people so that we could maintain safety. It’s really just a community thing to get people out and something to do. The purpose of it is to get people walking around, going to the shops again.”

Some of the planned events had to be scrubbed due to current government restrictions. Larsen originally planned to have a concert, beer and wine available, and two food trucks on site.