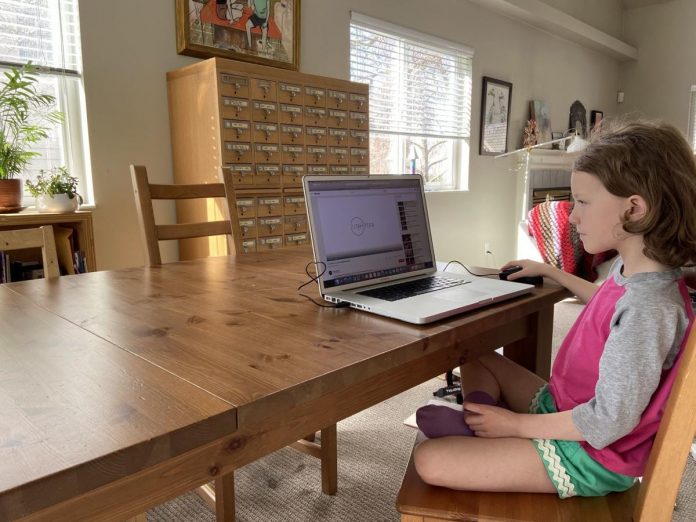 Editor’s Note:  TMJ has taken a look at how the local school districts are adapting to the coronavirus crisis. In our April 27 issue, we looked at the changes mostly occurring at the Woodland Park High School and Middle School. This week, we focus on the Cripple Creek/Victor RE-2 District, Gateway Elementary and the impacts for sports programs.

As a result of the governor’s order to close down schools for in-person learning during the COVID-19 pandemic, the local school districts have been forced to change their education process.

Once the governor issued his order the schools were tasked with quickly implementing distance learning that students could do while quarantined in their houses.

For both the Woodland Park RE-2 and the Cripple Creek RE-1 school districts the challenge to continue educating students during the pandemic has been a challenge. However, both school districts jumped on board and quickly adapted to the new environment of having to teach students virtually.

Once classrooms closed another issue that arose was how students would get meals now that they were not going into class every day. Both school districts then came up with a way to provide to-go meals for families that need them.

According to the Cripple Creek-Victor Superintendent Tory Richey, the transition to distance learning started with getting laptops into the homes of the families within the school district. Richey said that the district was able to deploy a laptop for every two students in a family.

Currently, the district has been teaching students virtually using online software such as Google Classroom and they will continue to do so until their last day of school on May 21. Then, the schools will offer a summer school online as well.

According to Richey, the district’s education process now consists of a combination of video instruction from the teachers and work students must do on their own. During the week the teacher’s host live instruction sessions and videotape some of them for the students to watch.

Richey also said that the transition to distance learning has worked well for some families but not so well for others. “Some folks its fine for and other folks are struggling because there are some parents that are working and they are out of the house during the day,” Richey said. “And there are others struggling just trying to make sure everyone gets fed. So, it’s a mixed bag I’d say for sure. It just depends on people’s ability to work with their kids during the day and I think that could be a frustrating thing for folks. So, we are just trying to be as flexible as possible with turning in assignments and working with them to give them the grace they need during this time.”

The superintendent also said that since the Cripple Creek-Victor graduating class this year consists of only 16 students, the school will be able to have a graduation ceremony outdoors while abiding by social distancing regulations at noon on June 18. “We have an asphalt track so cars drive on it all the time,” Richey said. “So, our logic to keep the social distancing is that we have invited seniors and their families to drive in one car around the track as we announce them from the press box. The advantage of being a smaller school district is that we can do something like that.”

The elementary schools in the area have similar distance learning procedures in place as the other schools and they also provide packet-based learning for some of the younger students within the district. According to Gateway Elementary Principal Ashley Lawson, Gateway has been mostly using laptops for their distance learning whereas younger students in the other elementary schools have been practicing packet-based learning.

“Gateway has one to one technology from kindergarten to fifth grade,” Lawson said. “So, chrome-books went home with all of our students, so all but about 15 of our kids are doing digital remote learning.”

Lawson said that the digital learning measures in place are similar to what the high school and middle school have been implementing. She said that the students get three live instruction sessions each day, a live class meeting each morning, and mentoring sessions every week. The students also have work that they do independently during the week.

Lawson also said that elementary school students have been demonstrating their learning in similar ways as the middle school and high school kids. The students take their content assessments online but the teachers do not watch them over video they just ask that the parent supervise the child during the tests.

For other classes, the teachers have had to get creative and find new ways to have students prove that they have learned. “For our special classes like P.E., music and art, the students are demonstrating their learning in a lot of different ways,” Lawson said. “So, they send pictures or videos of what they have done and our P.E. teacher does live lessons where he is teaching them a particular exercise or playing a game with them.”

Since all sports have been cancelled during the last semester of the school year student athletes have had to come up with new ways to stay in shape. Some schools across the state have held practices in small groups while abiding by the social distancing policies.

However, locally no sports practices have been conducted at this point. “Training and workouts have been on the honor system and students have to do it on their own,” Woodland Park’s Athletic Director Joe Roskam said. “Right now, we are not getting together at all but we are in the process of looking in to how we can do that. We are going to be in contact with the Teller County Health Department to make sure we are doing everything right.”

Roskam also said that CHSAA will not be doing anything until June 1. At that point the districts will decide what they are going to do about sports training.

Cripple Creek-Victor’s Athletic Director Rick Bowman said that the district has not yet figured out how to hold practices either. “We are doing some virtual training for some of our athletes,” Bowman said. “But we are still waiting for direction on how we are going to handle actual practices going into the summer months.”

According to Woodland Park High School senior athlete Joey Babin, the cancelling of sports has been tough for many athletes (especially for seniors) and it has forced students to get creative with how they stay in shape. “Honestly training now is all on your own,” Babin said. “It was unfortunate because it was my last baseball season and I was not able to pursue with that.”