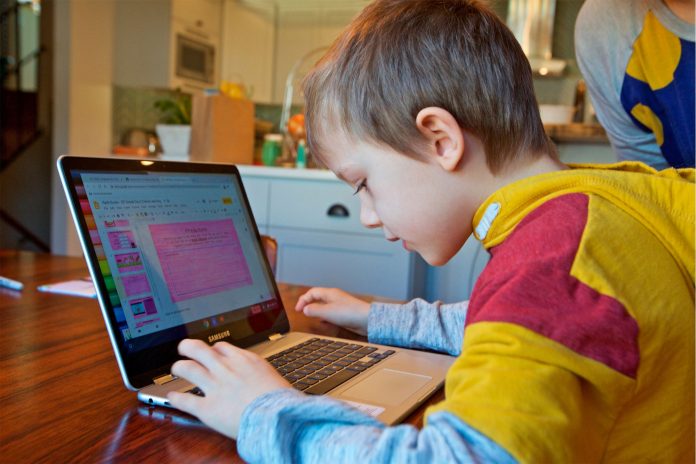 Teachers impressed over students’ attitude toward a changing environment

Colorado Governor Jared Polis has announced an ending of the stay-at-home order starting this week, with a call for the gradual reopening of businesses and a relaxing of certain rules.

But under the new plan, schools would still remain closed until the end of the semester.

Luckily for area school districts, the governor’s new action won’t change how they are doing business. It just means that they will be continuing the remote learning they have implemented for the rest of the 2020 spring semester.

Ever since the order was put into place that shut down schools for public in-class learning, both the Woodland Park and Cripple Creek school districts quickly started “distance learning” for all of their schools. For both districts at the high school and middle school levels, students have been learning through digital class sessions on computers provided to the students by the districts. The elementary school children have continued their education through completing packets of school work prepared for them by their teachers.

According to Stacey Schubloom, a spokesperson with the Woodland Park RE-2 School District, students in the area have been working on social distancing since their spring break ended in late March. After last week’s announcement by the governor, the district extended the remote learning they have in place until the end of the school year.

Schubloom said that the transition to 100 percent remote learning was a pretty smooth one because a lot of the practices were already in place and most of the students already had lap top computers issued to them by their schools. “For our high school and middle school, it was a pretty seamless transition because of the curriculum already and because all of the kids already have chrome books through the school,”

Schubloom said. “So, the high school kids already have one that they take home every night anyway so that was no big deal. The middle school kids had chrome books during the day and we had a system of them checking them out. And then for the elementary schools, chrome books went to the older kids and then the younger kids just need packets for their curriculum so we have a system for that.”

According to the Woodland Park High School Principal Kevin Burr, the transition to distance learning went very smoothly and the school has received good feedback from families and teachers. He also said that he was impressed with how quickly the staff and students were able to make the transition.

Overall, Burr said that he is impressed with how his school community has been handling the education process during the pandemic and that they have developed an instruction process through Google Hangout which is a similar program to Zoom. “Frankly it is going really, really well,” the principal said. “When you consider what we are dealing with, I couldn’t be happier with how we are reacting to it. It’s not perfect and it absolutely will never be close to in-person instruction. But my faculty and our kids just rolled with it.”

Burr said that when the distance learning first got launched his team developed a new temporary mission statement for the high school. “We said that we are going to keep moving academically as if we were in school,” Burr explained. “We are going to teach and learn according to the standards that are already in place and we are not lowering our expectations. We are just going to adjust the method of instruction and the methods of how you demonstrate your learning to us. What that did was really set a tone that said that this is just something we are just going to roll with, it is not something that should interrupt your education. And I’m really proud that everybody just bought into it.”

Burr said that the instruction now consists of instruction sessions online and then work that they must complete on their own. At the end of the week the students must then demonstrate their learning by video-taping exercises they did for P.E. class or by taking a test while being watched by their teacher on video.

Erin Street, the Woodland Park Middle School’s Assistant Principal, also said that the transition went smoothly at the school and that they were able to provide a lap top for all of their students. She said that the structure of curriculum is similar to the high school as they have a combination of live instruction with teachers and stuff they need to accomplish on their own.

So far, Street said that she has received good feedback from her students and families about how remote learning has been going. One setback, though, was that not all of the students at the school have access to the internet, so they specifically designed paper curriculum for these students.

As a part of their remote learning, Street said that the school has incorporated community service as a part of the curriculum. “During remote learning our students have been doing a community service challenge,” the assistant principal said. “As a part of the challenge, they find an area whether it’s in their neighborhood or back yard that has been littered and they clean it up and they take before and after pictures. We call it hash tag trash tag, and so they have been continuing to do that project even virtually. We have even offered a variation, like we have had kids take before and after pictures of their own closets or their own bedrooms. So, we have definitely modified it for the remote learning that we are in.”

Street also said that they have been talking about having a graduation for their eighth graders but that a formal celebration might not take place. However, she did say that the school is still developing and end-of-the-year video for all of their eighth-grade students and they are providing them with high school teachers to use during pep assemblies their freshman year.

The students within the Cripple Creek-Victor RE-1 School District have also been practicing remote learning and they have a graduation scheduled. In next week’s issue, TMJ will explore the steps the school district in the southern Teller area have been conducting in handing distance learning as required by the state.