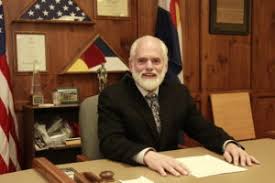 Last week’s regular meeting of the Woodland Park  City Council  went virtual through a platform app called Zoom, and like it or not, this will become the new prevailing practice for all government meetings held in “The City Above the Clouds.”

So spectators of live meetings need to take an extended break and brush up on their computer skills.

Due to the current stay-at-home policy in effect in Colorado, all meetings of the WP council, planning commission, and all other public meetings will be held using this Zoom conferencing method.

The meeting began with a heartfelt, emotional farewell to outgoing Mayor Neil Levy. Levy gave thanks to the city staff and citizens of the city for giving him the opportunity to serve as mayor. He said. “The opportunity to be mayor has been the greatest honor of my life and I just want to thank you all for your support for the last 6-years.” (Levy is battling cancer and has been undergoing extensive treatment for the condition.) After Levy’s farewell address, each member of the council, and some staff members thanked the mayor for his service.

The swearing-in of Mayor-elect Val Carr, Councilmen-elect, Robert Zuluaga, Jim Pfaff, and Rusty Neal was next on the agenda. Each of them gave a brief statement after the ceremony, thanking their supporters and promising to fulfill their campaign promises.

Councilwoman Hilary LaBarre was appointed mayor pro tem. Councilwoman Kellie Case was also nominated, but failed to get the necessary votes. LaBarre was selected by a vote of 5-1. The sole vote for Case, who made an unsuccessful bid for mayor, was cast by herself.

Carr noted that these commission and board positions may be changed somewhat after the appointment of a council member to fill Noel Sawyer’s seat. Sawyer recently resigned from council.

Public comment during the meeting, and in future virtual meetings, can be given by email, or by way of the “raise your hand” feature in the Zoom app. There was one public comment last week sent by email from Tanner Coy, treasurer for the DDA and president of Tweeds Fine Furnishings. Coy told the council that the DDA is likely to approve a resolution to reinstate the sales tax vendor’s fee and in reducing the business license fee. He asked that the council consider this resolution at a regular meeting.

One comment was submitted by Ann Esch via the Zoom app. Esch thanked the council for their service.

There was only one public hearing to approve last week. This was for Peak View BBQ Taproom, Inc. for a Hotel and Restaurant Liquor license, located at 1139 East US Highway 24. This was approved unanimously without discussion.

Resolution 861, which would provide a policy and procedure for remote participation in public meetings or boards, committees and commissions under the jurisdiction of the city of Woodland Park, was taken up next. City Attorney Jason Meyers explained this resolution simply authorizes these committees, boards, and commissions to meet via electronic means.

During the portion of the report of the meeting, each newly elected council member and Carr thanked the citizens for their votes and said farewell to Levy. Assistant City Manager Suzanne Leclercq certified the election results, noting that there were 18 additional ballots received. None of the results were changed with those additional ballots. She also welcomed the new council and thanked the outgoing members.

Finance Director Emily Katsimpalis noted that with the passage of the ballot amendment that stipulated the date of the city audit to conform with the state, that the city is well ahead of the state’s date for filing.