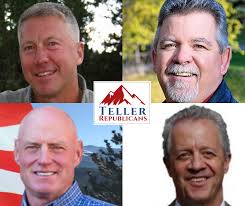 The coronavirus pandemic nearly shattered one of the big political traditions that typically attracts more than 100 civic leaders in Teller County around this time of year: The Republican County Assembly, regarded as the first test for seeking elected office in Teller.

The COVID-19 crisis posed a major challenge for this event, which often declares who will serve as the next cadre of elected officials in Teller.

But Teller GOP leaders refused to throw in the towel and went virtual and the party went on, with delegates selecting their top favorites for two key county commissioner seats and taking stands on a slew of issues. When the tallies were completed online, Dan Williams snagged the top spot in the County Commissioner District One race, garnering 52 percent of the delegate vote. However, his GOP opponent, David Rusterholtz, easily qualified for the primary ballot slate by receiving 47 percent of the votes.

For District Three, Erik Stone, the former chairman of the Teller GOP Party, won the assembly tally by acclamation, as he didn’t face any opposition in the delegate tally. But in the primary, he will confront a challenge by Phil Mella, who successfully petitioned his way onto the ballot and decided to bypass the assembly process.

As a result, the stage is set for two extremely competitive races on June 30, the date of the county and state primary elections. Unless any scheduling changes occur due to the coronavirus situation, the GOP primary will most likely determine the outcome of the commissioner races and which candidates will succeed current office-holders Marc Dettenrieder and Norm Steen. (They both are term-limited and so can’t run again).

And with the absence of Democratic candidates, the June 30 primary will actually decide these contests.

“We are excited to put forth these exceptional candidates for county commissioners,” said Mick Bates, acting chairman of Teller County Republican Central Committee, in a press release.  “Teller County has long been a haven for producing candidates that reflect our county’s conservative values, and our delegates saw that in these candidates.”

The fact that the party assemblies even could occur amounted to a major victory for local leaders.

“We had 62 percent of the voters cast their ballot using a desktop while 38 percent of the voters used a mobile device or tablet. The average time to complete the ballot was 7 minutes and 27 seconds. In a rural county with limited Internet access, we had high voter turnout and no technical issues,”said  Kimbrell.

“We had an 89 percent turnout of eligible delegates and seated 11 alternates to fill our 100 delegate seats allotted for this assembly.  We were ecstatic with the level of participation and the feedback we got from delegates was nothing but positive,” said Bates.

Commissioner Hopefuls Bullish About Their Prospects

The GOP candidates vying for the commissioner seats expressed much optimism about their upcoming prospects.

Williams, who serves as a Teller County planner, said, “I am honored to have earned the trust and confidence of our delegates in the time honored caucus and assembly process and I look forward to earning the votes of our citizens in the primary….and serving as your next  District 1 County Commissioner.

However, he made it clear that campaigning for the seat may take a backseat to his role in dealing with the coronavirus crisis gripping the county, state and country.

“But to be clear, as a county official, my focus now,  like so many others in our county, including our first responders, medical community, non-profits, volunteers and our city and county governments is the defeat of the coronavirus and minimizing its impact on Teller County,” said Williams.  “Every day I am privileged to work alongside examples of true leadership and other selfless public servants risking their lives for fellow residents.  While my campaign is going very well my focus now is serving our community as a current member of the Teller County government team.  I trust the people of Teller County to make the right choice at the polls and I know they understand and recognize that our priority now is their life, welfare and safety.    I could not be prouder to serve the people of this county alongside so many others doing the same.  Together we will all pull through this and emerge a much closer community, joined in adversity and shared sacrifice and we will know that we survived because we pulled together and leaders led.” In addition, Williams emphasized the importance of focusing on “economic recovery for our families and our businesses.”

Rusterholtz couldn’t be reached for comment for this article.

But on his Facebook page, the candidate heavily praised the Teller GOP leaders for pulling off an all virtual assembly at the last minute, and cited a tremendous volunteer effort in the process. During his campaign, Rusterholtz has been quite critical of taking a business as usual approach to county government. He also has questioned some of the regulations and codes, and wants to streamline the process more.

Political insiders believe he fared much better in the GOP delegate vote than many anticipated, as he didn’t have as much name recognition as Williams.

Stone, the winner of the GOP Assembly tally for the District Three race, also was quite ecstatic.

“I’m excited and grateful after winning topline at the Teller County Assembly. My message about county commissioners doing more to protect people’s natural rights is resonating, especially in light of the state government’s actions during this health crisis,” said Stone.

“With the primary election fast approaching in June, over the next two months, I will be focusing on connecting with Teller County residents by hosting a series of virtual Town Halls,” he added. “I plan on hosting at least four Town Halls over the coming months so that people can ask questions and let me know of their concerns for the county as we rebuild our local economy.  I will also keep one eye on the legislature as well.  I’m concerned about the actions that they will take while Colorado residents are focused on putting their lives back together. We must remain vigilant.”

Although winning the assembly delegate vote, he faces a stern opponent, as Mella, a former Woodland Park councilman, mayor  pro tem and planning commissioner member, secured a spot onto the GOP primary ballot by obtaining the necessary petition signatures from registered GOP voters in Teller County. This pathway is not unusual and one pursued by many local and state candidates, instead of going through the caucus and assembly process. Moreover, Mella stated that by taking this route, he got a chance to meet the citizens and discuss key issues of concern.

Mella kicked off his petition campaign in January and submitted 324 signatures on March 12. Out of this, 269 were certified by the clerk’s office, guaranteeing him a spot on the June 30 ballot.

“So, technically I was actually the first person on the ballot,” said Mella. “With respect to the issues I’m focusing on, they are largely the result of my listening campaign during the weeks I collected signatures.  I knocked on over 400 doors and spoke with hundreds of residents.  During this democratic, grass-roots campaign I learned that their concerns dovetailed well with my reading of the key issues.  Those include transportation, in particular the Hwy. 24 reliever route, growth and the related management challenges, strong support of our Sheriff, wildfire threats, and the importance of controlling the budget to safeguard the tax payers’ interests.  With respect to the budget, I have successfully developed and managed multi-million-dollar budgets, and have transformed several companies that were struggling into financial success stories.”

According to insiders, the two commission races could be extremely competitive as all four contenders are fairly strong candidates. TMJ News will sponsor a candidates’ forum in June at the Country Lodge in Woodland Park. Originally, this event was scheduled for mid-March, but was postponed due to the coronavirus situation. Stay tuned for more details.

During the recent assembly, party leaders also took stands on many key state/national issues, such as the red flag law, congressional term limits, federal funds for abortions, sanctuary cities, student loans, human trafficking and daylight savings time.  In all cases, GOP delegates endorsed the stand of state conservative Republican leaders, with no real surprise in their position. The biggest support was rendered for opposing the red flag law, which could allow guns and weapons to be taken away from those deemed as a threat to themselves and others. This law has outraged many Teller citizens and law enforcement officials, and apparently leaders of the GOP Party.