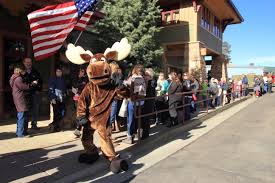 This Saturday, the famous moose comes back to town as the Moose Is Loose festivities launch their 20th consecutive year of entertaining shoppers, visitors, and residents.

The three-week-long event is meant to help bring people to the area for special sales and unique events during the slow wintertime.

And similar to past years, the celebration isn’t lacking in unusual events.

This year the event launches on Feb. 15 with a special kickoff gathering that will take place at 10 a.m. at Tweeds Fine Furnishings in Woodland Park. The event starts with the Boy Scouts posting the colors and then a performance of “America the Beautiful” by the Woodland Park High School Choir.

The kickoff at Tweeds will then have a special gunfight showdown with the town’s favorite moose and local politician “High-Price Paul.” The two will have a battle and only one of the local legends will survive.

Then on Saturday at 2:30 p.m., Susie Knight will be performing cowgirl poetry at the Historic Ute Inn in downtown Woodland Park. During all three Saturdays of the event, local railroad historian Mel Mcfarland will be giving guided tours of the cog railway car located at Bergstrom Park.

On the second Saturday of the celebration, the Teller County Regional Animal Shelter  (TCRAS) will be having discounted demonstrations from an animal trainer and clinical therapist Lisa Lima during an event coined “My Life Unleashed.” During these sessions, scheduled in the morning, people can learn from the training and behavior modification expert about how to teach their dog to heel without pulling and learn to stop jumping.

Then on Feb. 22 at 2 p.m., the Historic Ute Inn will host a special comedy performance. The Oxymorons will be in town to perform “Clean, funny, God-honoring comedy and improv for all ages.”

During the last Saturday of the Moose Is Loose celebration which lands on Leap Day this year, the Woodland Park Community Cupboard starts the festivities at noon with free hot 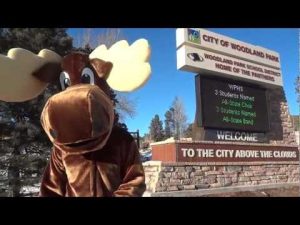 cocoa and cookies around their toasty fire pit. Then, at 2 p.m. Dana’s Dance Studio in downtown Woodland Park will be offering a free line dancing lesson for those interested in learning a new hobby.

At 3 p.m., Mountain View Yogurt Plus on the town’s main strip will be hosting a performance by the Woodland Park Dream Team Pep Band along with a special Leap Year Birthday Party.

During the three weeks of the celebration, the event’s mascot, the famous moose, will be making special appearances all around town. As a part of the event, shoppers can go to each store that is participating and get a playing card . Once shoppers have collected cards from the various businesses, they can then use all of the cards they gathered to put together a poker hand that can be used to win different prizes.

The History of The Moose Is Loose

According to Tanner Coy, the president of Tweeds Fine Furnishings, the Moose Is Loose celebration started 20 ago when Tweeds was still located in Cascade. Coy said that during their first year open, the business saw good revenues in the summertime but that during the winter, their sales drastically dropped.

Coy explained that they wanted to come up with a sale to attract shoppers during the slow season, but he did not want to just run a President’s Day sale or some other short event like other furniture stores in the area do. He wanted a sale that lasted a little longer than others and one that was themed more towards the style of furniture that Tweeds offers.

Since the store specializes in providing high-end, fine furnishings that go along with the mountain home theme, Coy wanted the sale to reflect life in the high mountains. He then decided to make the mascot of the event a moose and play on the idea that the large animals are seen from time to time in the area.

After running the event as a sale for Tweeds for a decade, Coy decided to change the event when he moved to Woodland Park during a recession. “In 2010 the recession had set in worldwide, and for us and for this area, things were particularly slow and particularly bad,” Coy explained. “There probably wasn’t a business around that didn’t feel the pain. A lot of businesses were closing their doors and people were losing their homes. And it was a very tough, very difficult time.”

He said that when winter came that year and the Moose Is Loose sale time was approaching, he and his team knew they needed to change the sale somehow to make it more effective.  “Myself and my staff realized that we really needed, out of necessity, we needed the moose sale to be more effective than ever before,” Coy said. “And yet our budget had been declining for two years. So, with less money what could we do to make the sale more successful, that was the challenge. The one idea that prevailed was to grow the Moose Is Loose sale beyond Tweeds to give customers more reasons to come out and shop than Tweeds alone can give them.”

Coy said that he found that sharing the advertisement and marketing efforts for the event with other businesses in the area would not cost any more then what they had already been spending. Coy said that during that first year implementing their new idea, the plan worked and more people had come out to shop and stimulate local business during the slow winter season.

According to Coy, every year since then the event has grown by the numbers of companies that participate and sponsor the event. This year the event includes over 20 participants and sponsors as it celebrates its 20th year.