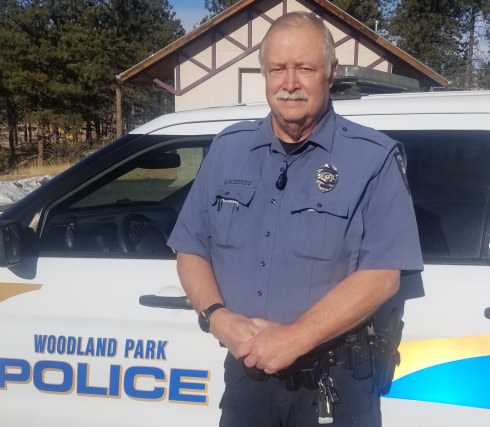 Officials announced that Robin Lindberg received a dispatcher award from the El Paso Teller 911 Authority, and that police officer Bill Schultz was promoted to Master Patrol Officer (MPO) after volunteering for nearly 2,000 hours in 2019. 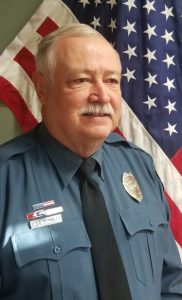 MPO Bill Schultz volunteered for more than 1,900 hours in 2019 before receiving his promotion about two weeks ago. Schultz is 70 years old and has had experience in a variety of different careers before choosing law enforcement in the latter part of his life.

During the Vietnam conflict, Schultz voluntarily joined the army and chose to go to Vietnam as a combat medic. After he left the war zone, Shultz then had a long career, working with the Department of Human Services.

At one point, the volunteer police officer worked for the Department of Human Services (DHS) in Teller County before being offered a job out east in Bent County as the director of Human Services. After working there with law enforcement officials as a part of his DHS duties for nearly ten years, Schultz decided that he wanted to pursue a career in law enforcement.

Schultz trained at the law enforcement academy in La Junta and then became a sheriff’s deputy in Bent County. While he was there, the officer received a medal of valor award for disarming an armed suspect.

For the last few years, Schultz has decided to spend his retirement volunteering three to five days a week with the Woodland Park Police Department. He says that he enjoys being out on the road and that he likes to practice “community policing.”

Woodland Park Police Commander Ryan Holzwarth said that as a result of his vast amount of experience with DHS, Schultz is good with connecting with people of all ages

from senior citizens to small children.

“He is the gap between what we do and what the people want to see,” Holzwarth said. “You can’t always accommodate everybody, so the officer goes there takes the initial call and we’re done. Most of the time, I hate to say it, we get busy and other things happen and we can’t necessarily give that personal touch. Bill, when he gets that call he’s the go-between. He has that ability and he does it very well so he is that middle man that steps up and helps us out when people say, ‘yeah I wish the cop would have spent more time.’ He will do that for you.”

Schultz is well known in the community for doing things like handing out snacks and drinks to newspaper reporters, saving people stuck on their roof, and being good at “the gift of gab.” Schultz says that he uses his style of community policing in order to change behavior.

However, even though Schultz has a down-to-earth spirit and likes to use humor to verbally de-escalate tense situations, he is still prepared to handle dangerous encounters as a law enforcement representative by any means necessary. “I’m prepared to do what is necessary to control a situation,” Schultz said. “I can do it with a smile, I can do it with ‘please sir don’t resist’, or any of those things I need to.”

Schultz told a story of one incident where he was dealing with a man that he knew was armed. “Do not pull out your weapon,” Schultz said he told the man. “You don’t want them to be talking about you on the news tonight in the past tense.”

The Woodland Park Police Department recently announced that a member of their staff has received the award from the El Paso/Teller 911 Authority. Local dispatcher Robin Lindberg received the Telecommunicator of the Fourth Quarter award for 2019.

The reward came after Lindberg pulled through in a scary situation. On Halloween of last year, Lindberg was working a shift when she received a 911 call from a woman saying that her neighbor’s wife had fallen down the stairs.

Lindberg quickly followed protocol and asked the woman if the patient was awake and if she was breathing. After receiving a “no” answer to both questions, Lindberg promptly began instructing the 911 caller on what to do.

According to a resolution declared by the El Paso Teller 911 Authority, “Because of Robin’s quick thinking and knowledge of the protocol, the caller’s neighbor is still alive today.”

According to Woodland Park Police Chief Miles DeYoung, all of their dispatch officers are trained in how to help a 911 caller handle emergency situations themselves before the first responders arrive.

“When somebody calls 911 and there is somebody having a heart attack, they have fallen, or they have a really bad laceration or they are sick or they are having a diabetic emergency, whatever they are experiencing, our dispatchers are trained to walk somebody through or walk them through how they can improve their situation until the ambulance or the officers get there,” DeYoung explained.