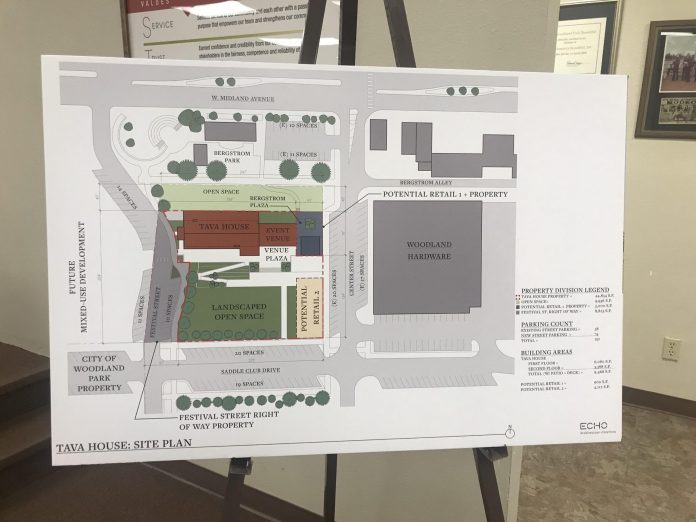 A much-anticipated update on the development of the Woodland Station area downtown was presented at the January regular meeting of the Downtown Development Authority, but it still fell short on details.

DDA Treasurer Tanner Coy said, “The Williams/Christian project developers are very very excited right now for use of the property.” This is another group that has expressed an interest in developing a key section of Woodland Station.

Another proposal, the TAVA House, a multi-use project, was recently pulled from the tables.

DDA Chairwomen Merry Jo Larsen stated she would like to arrange a meeting with the developers and the DDA board to discuss the project.

Coy said that Williams is anxious to do that and discuss the project as well as get more information out to the public. For some time, the Williams/Christian project details have been kept secret. Coy said, “What they’ve proposed has remained confidential and we’re

feeling the pressure to get that plan out so the public knows what we’re working on, what it is they’re proposing.”

In other DDA news, the board discussed their goals for 2020. Larsen listed those goals. She wants to see the DDA revisit their grant options, upgrade beautification with the aid of those grants, and have the DDA help existing businesses.

Coy mentioned the budget as another goal the DDA should be striving for. He suggested the DDA needs to put some money away and set a priority to pay down some of the debt service.

Time to Bring In An Expert

Veteran Board Member Al Born gave a long dissertation on the role of the DDA. Born suggested the board should hire a land-use expert/planner. He believes the DDA is much too involved in issues they have little experience in when it comes to dealing with developers.

Born proposed to “change the scope” of the board. He pointed to the many proposed projects that have “fizzled out” on Woodland Station.

This led to some heated debate among the board. Some on the board took exception to Born’s proposal, especially when the board is on the verge of having a developer ready now to develop Woodland Station. Board Member  Elijah Murphy noted that hiring outside consultants could get expensive. He said, “Real estate brokers don’t work for free, they get a 12-percent fee.” As far as the Woodland Station development issue goes, Murphy said, “If money were easy to come by, this thing would already be done. And that is always the issue, money.”

Coy said he agreed in principle with Born, but he pointed out the expense already shelled out on consultants. He said, “This body has spent a lot of money, about $1-million hiring professionals, planning development, marketing to little avail.”

Others on the board pointed out other stumbling blocks to the Woodland Station development, such as market feasibility, time constraints, and infrastructure issues.

During the general discussion portion of the meeting, Murphy suggested the board collaborate with other entities like the chamber of commerce, and Main Street in trying to bring business from Colorado Springs to the city.