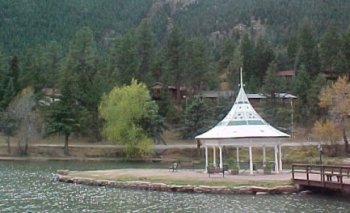 The 2020 year will get off to a fast start on Jan. 7. That will mark the first meeting of the year for the board of trustees, and it should be lively.  During that session, plans will be unveiled for the town’s most ambitious  annexation bids for future private projects. At issue are plans for annexing nearly 32 acres in the Red Devil Mountain and old Joyland Church areas for commercial, open space and trail uses. The annexation is being requested by the Historic Green Mountain Falls Foundation and Chris Keesee, founder of the Green Box Arts Festival.

This is the first time the plans will be presented before the trustees. A lively discussion is expected, based on the town’s divided views regarding future growth.

The annexation bid, capped by a possible new three-story hotel and restaurant, was previously submitted before the planning commission. According to earlier reports, the plans were well received.

According to Foundation representative Jesse Stroope, the annexation includes two separate parcels, with the main emphasis initially consisting of plans for trails and open space. No set timetable has been proposed for the commercial development.

The annexation won’t occur overnight, with a lengthy process outlined. The Jan. 7 meeting will

mark  the first time the public can discuss the project.

Still, not many specific project details will be released. The trustees will mainly focus on a potential annexation agreement.

Future annextions were mentioned in the 2019 comprehensive plan for GMF as a way to generate more revenue.

But future annexations are only part of the mix for GMF in 2020.

The town will have a city election in April, with the mayor’s  seat up for grabs.

The next year also will play a pivotal role in determining if the GMF’s town manager experiment will work.

Following a lengthy search, the town selected Angie Sprang, a policy analyst for the city of Carbondale, in late August as the head manager. Both she, the trustees, key state officials and some residents had a public workshop several months ago to discuss long and short-term goals. Many of these ideas focused on future fire mitigation and better staffing the town, and of course, road improvements.

This year could determine whether the idea of having a permanent town manager is workable. In the last few years, GMF has mostly operated with interim managers.

Success or failure as a town manager could be decided by the  local road verdict. Deteriorating road conditions has been the main stumbling block for previous administrations.

Sprang says the town is now fully staffed in operating a public works and maintenance crew. But addressing continual road woes with a limited budget  has posed quite a challenge, and has led to some pleas for becoming un-incorporated.

Future improvements at the lake could also gain much attention next year, with the town trying to snag a variety of state and federal grants. This is a project that has gained much public support, but has encountered funding obstacles.

Time management is apparently a goal of the new administration.

In one of her first major policy changes, Sprang proposed a plan to run town matters more efficiently by slicing their public meeting schedule in half, with only one trustee and planning commission meeting a month. However, the town manager wants to use advisory committees more.

And lastly, residents may finally reap  the benefits of a new $4 million, 14,000-square-foot, 24/7 fire station for the GMF/Chipita Park Fire Protection District. The station will be located near town hall. Preliminary dirt work has already begun, with construction on the new  facility scheduled for early 2020, with a completion date set for later in the year.

The new fire station is a byproduct of a favorable vote on a bond issue in 2016.  At the time, fire district leaders cited the current station on UtePass Avenue as totally inadequate.