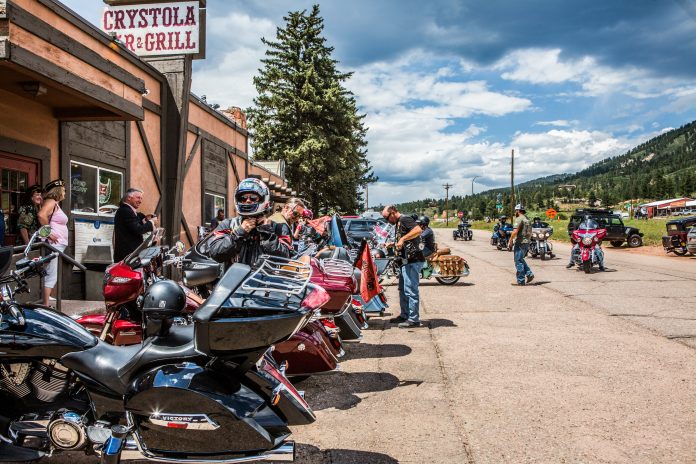 Last week, the Veterans Charity Ride (VCR), a national group of veteran motorcyclists, traveled unchartered territory as they trekked through Teller County and make a key stop in Crystola for the first time ever.

Making a trip into Teller isn’t too surprising, as the local area has become a growing hub for veteran organizations.  After all, this is the home of the Salute to American Veterans Rally and the Eric Dickson Memorial (which pays homage to the sole casualty of the Vietnam War from Woodland Park). In the last few years, the region has featured many veteran-oriented ceremonies. 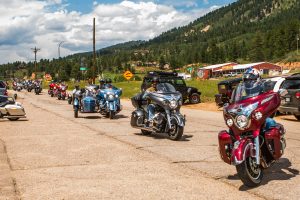 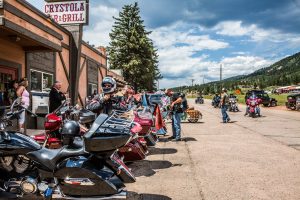 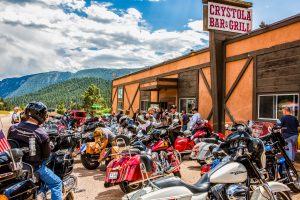 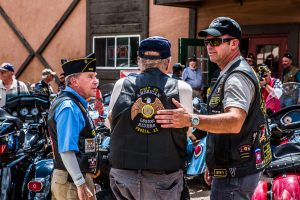 The group was greeted during their ride this year by the local American Legion Post 1980 and Teller County Senior Planner and County Commissioner candidate Dan Williams, who is involved with many veteran organizations.

According to Williams, Post members found out that the VCR group had never been through Teller County during their annual ride. After hearing this news, the team invited them on a trip through the Ute Pass region and welcomed them at the Crystola Roadhouse for lunch last Tuesday.

Williams said that the Crystola Roadhouse offered to buy half of the riders’ lunches and the American Legion agreed to pitch in for the rest of the bill. Williams also said that he was excited to meet the VCR members since he is a war veteran himself.

“Veterans have a special connection with each other,” the county planner said. “We have all been through things that we can’t talk about with other people.” As the riders arrived at the Roadhouse, many Legion members, including Williams, greeted the veteran bikers with a welcoming handshake.

The VCR crew consists of 17 military veteran riders that come from all over the country. Some of the riders are amputees and many of them suffer from ailments such as Post-Traumatic Stress Disorder (PTSD). The group, according to a press release, helps deliver motorcycle therapy and additional life changing holistic programs, specifically designed to assist wounded and amputee combat veterans with their needs and the issues they deal with on a daily basis.

The ride originates every year in Utah and the group spends three weeks total taking various routes to the famous Sturgis motorcycle festival. The group originates out of Moab, Utah, and that is usually where the riders begin their journey.

However, according to members of the VCR group, the riders started in Salt Lake City, Utah this time around. The bikers then went from Salt Lake to Moab to hang out for a little bit and have a reception in the town.

The crew also switched it up this year by choosing a new route so that they could enjoy a little of what Teller County has to offer. After heading west from Moab, the riders decided to drop south from the interstate into Leadville. The team then took the scenic mountainous route over Wilkerson pass into Teller County.

The ride slowed the group down a little as they traversed the mountain highways on two wheels. The team arrived about two and a half hours late, courtesy of the challenging mountain roads.

Once the bikers arrived at Crystola, they ate lunch and had a chance to converse with local fellow veterans. After lunch, the riders hit the road once again to continue their journey to Sturgis.

The riders in the group said that they like to take their time getting to the famous motorcycle festival in South Dakota, so that they can enjoy the mountainous scenery. They said that the trip takes them about three weeks in total , which includes time to hang out at the popular biker event.