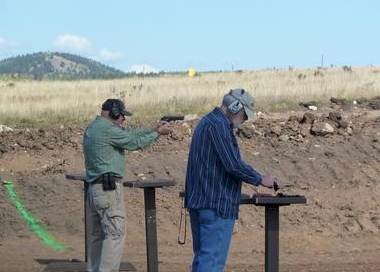 Teller County and Cripple Creek is gun country, with firearm ownership statistics among the highest in the country on a per capita basis.

In addition, the region is a staunch endorser of Second Amendment rights, and bids to open up more public land areas for public shooting facilities have received strong local support. In fact, our area supports such pro-firearms ventures as the Southern Shooting Partnership.

But the touchy issue of securing a local shooting range is another matter, with the location of such sites raising more questions than answers.

Following a lively discussion last week, the Cripple Creek City Council agreed to have more discussions and establish dialogue with a working committee of the Teller County Marksmanship & Self Defense group.

At issue is a bid to for the club to use the Cripple Creek Police Department shooting range, near the public works facility, on a limited basis.

“We are doing something worthwhile.  We are not a gun club,” said Jeff Gillis, a leading member of the club, who addressed the council last week.

He described growing support for their group that mainly emphasizes education and firearm safety. Moreover, the club leader described a growing interest in the group from women interested in self-defense, and in youth programs

The club has gained much support in the last few months, and holds monthly meetings on a variety of subjects, addressing such hotbed issues as the red flag law (that can take away weapons for those deemed as mentally unstable.)

According to the club’s proposal, they would only use the fire range twice a month, and would have designated club personnel on site to monitor the activity. They asked the council for the go-ahead for a  one-year probationary trial period.

As an added advantage, Gillis described the benefits of having a more designated and formal shooting range for gun enthusiasts, with a strong level of supervision and training in a controlled environment. And anyone who defied their rules and opted to play Wyatt Earp on the range, would be thrown out immediately, noted the club leader “We want to weed these people out,” said Gillis.

Not a good place for gun club use

City officials lauded the group’s mission but raised a red flag about using this particular facility.

Carrol Stotts, the city’s human resources and risk management director, maintained that the plan would create a bad precedent. Stotts described herself as aa strong gun advocate but outlined a bevy of liability concerns. “I have a lot of questions about enforcement,” she said. “You are really opening yourselves up.”

If the council said yes immediately to the plan, Stotts indicated the city would most likely have to allow other groups in the region to use the range.

Moreover, she cited a big concern with the club using a shooting range so close to the new Mountain View Adventure Park.

At the very least, the risk management director said more insurance requirements must occur for the plan to move forward.

Although not taking quite as strong of a stand, Cripple Creek Police Chief Mike Rulo described the concept as outstanding.  But like Stotts, the chief had reservations about the location of the range the group wants to use.  He described the Mountain View Adventure Park as an outstanding city facility, and didn’t want to pose negative noise impacts on the park users.

Rulo, a veteran firearms trainer for the FBI and many agencies, though, indicated the police department wanted to work with the Marksmanship and Self-Defense group.

Group leaders backtracked slightly and stressed that their main intention hinges on “education of firearms.” They indicated a desire to address any of the concerns the city has in using the police range, and in making necessary insurance arrangements.

Councilwoman Meghan Rozell suggested that the group establish a working committee and that more discussion occurs with city officials in crafting a possible solution.

No action was taken by the council. Mayor Bruce Brown supported the idea of having more discussion, saying they received detailed information just prior to the meeting.

Two elected leaders, Mayor Pro Tem Chris Hazlett and Councilman Tom Litherland, had to abstain from any discussion on the issue due to their involvement with the club. Hazlett has been a big proponent of the club’s mission. “We have had a very positive response from the community at large of our vision of an organization that is not just home to  bunch of old ‘gun nuts,’ but one that will encourage the development of civic values among our youth through a program dedicated to them,” said Hazlett in a previous interview.

The marksmanship and self-defense group has really taken off in the last year. They originally kicked off a year ago with just 10 members, but now have grown to more than 50, including a number of  civic leaders in the community.