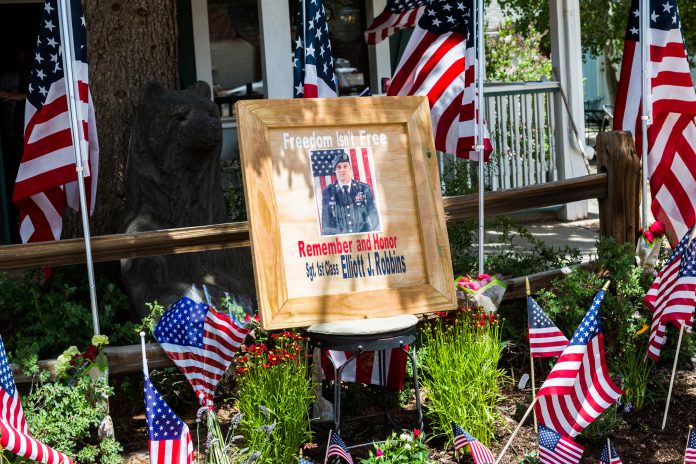 ~ by Bob Volpe ~
A large crowd of veterans and local citizens turned out to memorialize the life of local resident, Green Beret Sergeant Elliott Robbins, who was killed last week in Afghanistan along with two of his comrades.

It was a chilly morning when more than 100 people turned out at 5:30 a.m. to honor Robbins in front of the Costello Street Coffee House in Florissant, which he and his wife Vickie Robbins own.

The popular coffee shop, located at the junction of Teller 1 and U.S. Hwy. 24 is an acclaimed local hangout. The Robbins’ bought the business a year and a half ago, as part of a way to live their version of the American dream.

But that dream has taken a drastic turn.  However, locals and veterans came out in force last Thursday morning to offer their support to the Robbins family. Throngs of friends and strangers gathered around the coffee house to write cards, pray, give emotional farewells, hug each other, and to celebrate the heroic deeds of a former veteran. American flags donned the community of Florissant, a town that is not afraid to exhibit patriotism on its sleeves.

Elliott Robbins was one of the soldiers reported killed in Afghanistan on June 30th. Heartbreakingly, he was only three weeks away from coming home.  He and Vickie had just had their first son, Elliott Jr, just a few weeks before this deployment began. Elliott Jr. will be growing up without knowing his father. But the child will certainly learn plenty about his father through the  network of area veterans.

The three deaths, which are under investigation, bring the number of U.S. troops killed in Afghanistan this year to 10, according to the U.S. Defense Department.

“We mourn the tragic passing of Sgt. 1st Class Elliott Robbins. The 10th Special Forces Group has paid a heavy toll in recent days,” Ferguson said in the release. “While we mourn, we will support Sgt.
1st Class Robbins’ Family and honor his service.”

But the July 4th memorial in Florissant wasn’t about these awards.

According to reports, Army officials reportedly came to the door of Vickie Robbins’ home on the evening of June30 to deliver the tragic news. While she visited with her family away from Colorado in mourning her husband’s death, locals and neighbors organized a gathering to offer their support on July 4.

It wasn’t hard to generate many attendees, as Teller County is an area that takes care of their veterans. Altogether, it is estimated that more than 200 attended throughout the morning.

The gathering featured a number of tribute speeches and special memories of Elliot Robbins. One of the  most emotional speeches came from Don Bartron, a retiree of the 10th Special Forces Group, who also served as a Green Beret before Elliott. The latest Afghan casualties have hit the Special Forces group hard.

Bartron stressed the importance of  viewing July 4th as “Independence Day” and a way to “come together.”

It is still unclear if other special tributes will be organized in the future to honor Elliott Robbins. But if history repeats itself in Teller County, the life of the former veteran and Florissant business owner won’t be forgotten.