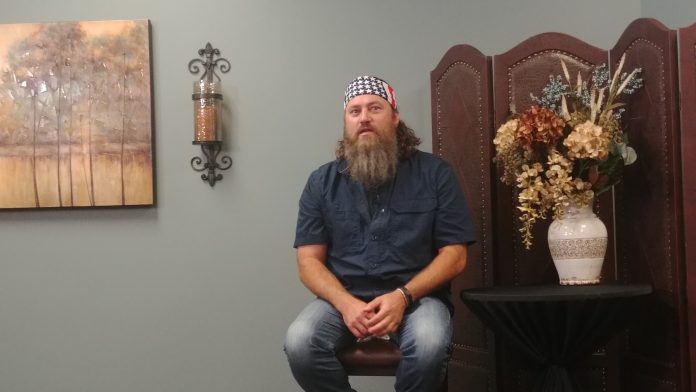 Last week, the Charis Bible College in Woodland Park held their annual Kingdom Business Summit that attracted hundreds of people from across the country to the mountain town.

This year, the event provided a special treat with an appearance and speech by the famous CEO of Duck Commander and star of the reality TV show, Duck Dynasty, Willie Robertson.

Robertson said that he had recently spoken during a leadership conference in Colorado Springs and that he was in the state visiting family that lived north of the area. Robertson has been spending much of his time lately speaking across the country about four or five times a month as well as being the maintenance man at a Christian camp run by his son called Chyoca, knowns as the Christian Youth Camp.

“It’s just a good opportunity to talk about the Lord and the business and what we’ve done,” Robertson said during a press conference at Charis Bible College. “It’s good to be here.”

He said that his main purpose of the visit to Charis was to tell his family’s story. The reality movie star said that he and his family never thought that they would experience the success they have encountered.

“We are just regular people. We didn’t necessarily try to be on television, we just ended up there,” added the television star and avid hunter.

Robertson said when asked why he thought his show resonated so well with such a wide audience. “It’s a family show so I think everybody can relate to the family aspect. We have heard over the years, ‘yeah, my uncle is just like your uncle’ and ‘my dad is just like your dad.’”

Robertson’s family’s secret to success has worked out for them after running their Duck Commander business since the 1970s. As a result of their successful television show that became the most watched reality show, the Robertsons’ sold over a million duck calls. According to the company’s CEO, they have also sold over a million books and a million music albums.

Robertson also said that he feels he can inspire people at Charis Bible College and Woodland Park in general. “I want to encourage them just by our story,” Robertson said. “I think they will realize from our story that we didn’t always know and that we didn’t really come from anything. We want to give them encouragement and say ‘hey, man you can do anything!’”

During his speech at the Charis business summit, Robertson told the story of his family. He started with a tale of when his dad, Phil (the family’s patriarch), went down a dark road and almost lost his family. Phil at one time became a victim of alcoholism and almost gave up his family to run a bar where he had a raccoon that would fight any animal a customer was willing to bring in for the challenge.

Then, one day the Robertson family patriarch was visited by a pastor and shortly after he decided to change his ways. Once the senior Robertson welcomed religion into his life, things continued to change for the better for his entire family.

The moral of the story, according to television personality Willie Robertson, was that their family’s success can be attributed to one decision made by his father. He made it clear to the audience that his father was not the only one in their family’s story that resulted in him changing his ways and being a better husband and father. He asked attendees: “What part of this story are you?” He was referring to the roles of the pastor, his mom, and his children played in Phil Robertson’s life changing for the better.

The Duck Dynasty celebrity also stressed that the family has always kept a slogan as a list of priorities in life: “Faith, family, and, ducks, in that order,” Robertson proclaimed.

He explained further by saying that his family had faith before they had a successful business so they were easily able to integrate the two. But the television star doesn’t try to mask his love for hunting. “We are all holding out that there is duck huntin’ in heaven,” Robertson quipped.