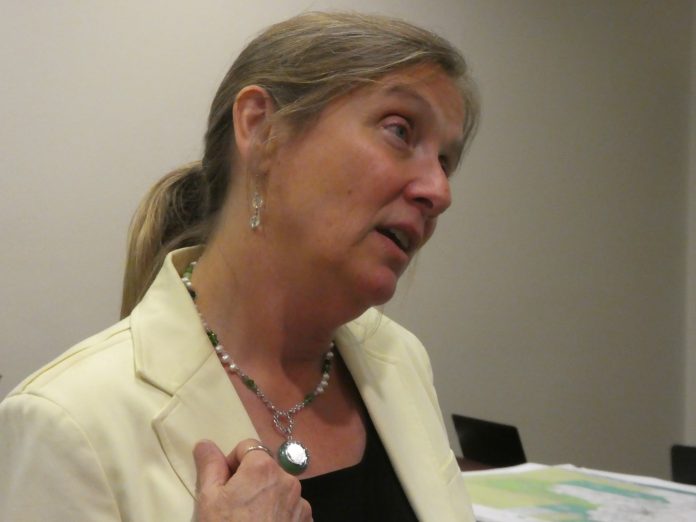 And the big question:  Will the third time become the charm for local leaders who have encountered a somewhat rocky road in their quest for a new, municipal manager?

Last week, officials hosted another meet and greet for the latest finalist, Karen Gerrity, who serves as the current administrator for Nederland, Colorado, in Boulder County.

Gerrity had an interview with the trustees, met the staff and listened to concerns from a group of local residents, as part of an all-day tour. Gerrity is the third finalist to emerge for the position in the last month, a search has attracted many candidates from Colorado and across the country.

Town leaders couldn’t reach a contract agreement with the initial top finalists. These finalists were Emily Katsimpalis, the former assistant town administrator for Buena Vista; and Kyle Coleman, the assistant manager for the village of Estero, Florida.  Katsimpalis actually declined the position and then eventually accepted a  position as the new finance director for the city of Woodland Park.

Both initial finalists partook in a meet and greet with residents on April 30, but opted out of the position. This forced the trustees to evaluate other applicants and they did preliminary interviews with four candidates, with Gerrity getting the top nod.

In a brief interview with TMJ News last week, Gerrity expressed much elation about the potential opportunity. Gerrity said she and her husband, Orrin Snider, are looking at simplifying their lives and downsizing, and see this job an ideal chance to achieve that goal. They are both quite familiar with the area and actually once held a big family reunion in Manitou Springs

They both love the outdoors and view GMF as a good fit.

On a professional level, Gerrity stated that she sees many comparisons with the challenges she has dealt with in Nederland and those in Green Mountain Falls.

“Both towns have big issues with a lack of money and mountain roads,” said Gerrity.  But at the same time, she said both communities are confronted with “an opportunity for economic strength.’

In addition, she cited growth as a big touchy subject in both locales. Neaderlan is located in a section of Colorado that is bombarded with an explosion in growth. El Paso County has had a similar predicament.

However, Gerrity realizes the political climate is different. Nederland, for example, is a community that has opened the door for recreational marijuana shops, something viewed as a no-no by most GMF trustees.  Green Mountain Falls, similar to most communities in the Pikes Peak region, has shut the door for cannabis retail shops. But this idea got somewhat of a friendly response during one of the initial master plan community forums,, and continues to generate mixed sentiments.

The one-time reefer boom in Nederland has slowed down dramatically. “I will just say one thing on that subject. It is a mixed bag,” said the Nederland administrator.

Gerrity has served as the administrator for Nederland for two years, and also had extensive government experience in the Boomfield area, north of Denver, serving in a variety of roles, including one stint as a cultural affairs director. Gerrity has extensive experience with grant writing, government management, finance, human resources, community development and project management.

Like other finalists for the job, Gerrity received an earful regarding some of the top issues. She also conversed with residents during the final review of the comprehensive master plan project, with huge maps and displays covering town hall.

If a contract can be finalized, Gerrity could become the next town manager.

Town trustees, though, remained tight-lipped about the timing.

Wells Stepping Down As GMF Manager

However, the clock is ticking for GMF in the selection of a top boss. The town has operated under the reign of part-time, interim town manager Jason Wells for the last year and a half.

But Wells, who served as the administrator for Manitou Springs, is hanging up his cleats soon as town manager and pursuing a new venture as a business entrepreneur. He will soon become the owner/operator of the Ancient Mariner establishment in Manitou Springs, a local bar/eatery and entertainment institution for years. It is described by the chamber of commerce as a “flagship bar venue in historic Manitou Springs” and great place for live music.

As a result, Wells said he can’t spend as much time manning the managerial ropes in Green Mountain Falls.

In fact, Wells’ new business role attracted almost as much attention last week as the pick for a new GMF town manager, with many locals wishing him good luck with his new venture. Wells said the new owners plan to rename the Ancient Mariner as the Armadillo Ranch.

He expects all the licensing and permit work to be completed shortly.