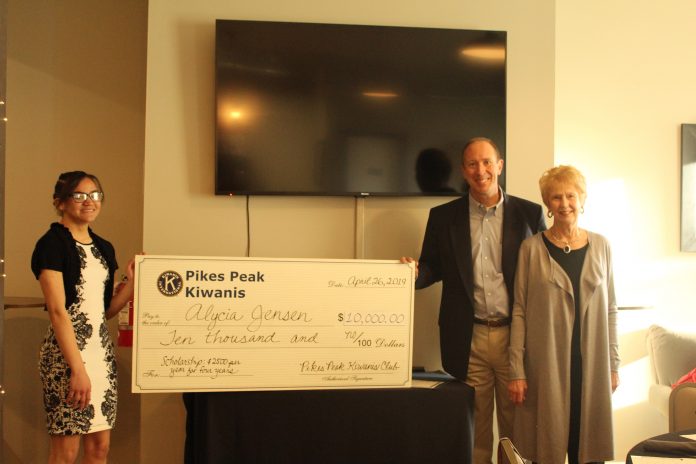 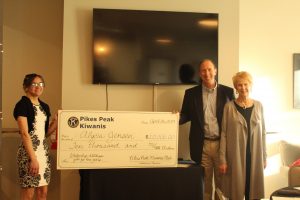 Alycia Dennise Jensen of the Cripple Creek-Victor High School RE-1 District plans to earn a degree in Chemistry/ Pre-Med at Western State University.

Alycia served as a magazine editor and Varsity starting captain of Basketball, Volleyball and Cheer.  She also served as the Vice President of the Key Club, a Kiwanis service based youth club. Alycia won the National Science Foundation recognition award as well.

Faith Jillian Roth of Coronado High School plans to earn a Business Management degree with a minor in Spanish at Colorado State University. Faith was very active in her high school and was a part of the – National Honors Society, Link, Yearbook, Photography, Art Club, National Awareness and the Legion Auxiliary Girls State. She was All-State First Team Track and Field and Cross Country and qualified for state all 4 years of high school.  Faith volunteered with Pikes Peak Road Runner Series, Morning Star, as a track and cross country assistant coach and Pay it Forward. She lettered academically for 3 years and won a Jostens yearbook photo award

Since January of 2012 the Pikes Peak Kiwanis Scholarship Fund has awarded $145,250 to 22 students attending 12 different Colleges and Universities in Colorado.

The original foundation of the Jack Agee Memorial Scholarship was established in 1993 and initially funded from several community members and clients of Jack Agee as a legacy donation.  The scholarship initially, being held at a private foundation, gave scholarships to high school seniors that participated in area Key Clubs.  That requirement no longer exists, as the funds are now held in a public foundation and donor-advised fund. Scholarships were initially awarded in $1000, with $125 being awarded each semester, and have grown substantially over the years.  The fund is still being contributed to today by members of our community, corporations, and various fundraising events.  The value of the fund has endured for the last 26 years and is projected to last in perpetuity.

Scholarship Recipients are required to maintain a 3.0 grade point average and show continued support through community service.The scholarships are generally four-year awards that total $10,000 over eight semesters. The payout for each semester is $1,250.

Students from across the region are encouraged to apply for the program at pikespeakkiwanis.com or through a school counselor.Candidates for the scholarship will be considered that have a proven academic record throughout their high school careers and have been accepted and plan to attend a Colorado state-funded college or university.

Pikes Peak Kiwanis club is a community service organization focused on serving the needs of children right here in Colorado Springs, while supporting programs that positively impact children all over the world. The club members are active at the ground level; not only supporting but also participating in activities that improve the number of children’s organizations in our community. Pikes Peak Kiwanis club is constantly looking for partners to join with us in our efforts to support students of our community in their educational goals and efforts

Kiwanis is a global organization of volunteers dedicated to changing the world one child and one community at a time.