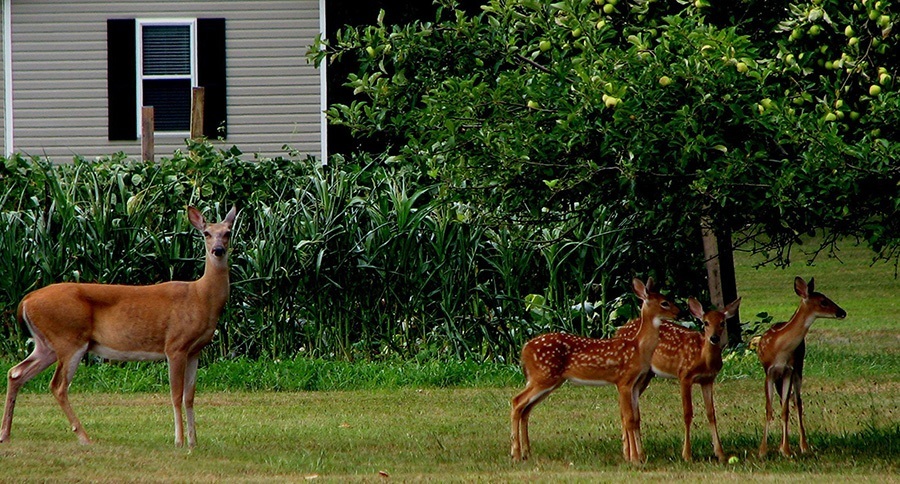 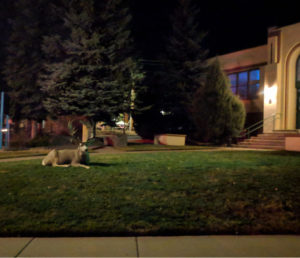 The long-awaited city deer count was presented to Woodland Park elected leaders last
week, following months of speculation regarding whether residential sections of town should become a “deer hunting” zone.

This issue has stirred much debate over the last year, with mixed opinions but no real definite conclusions rendered by state and local officials.

Also, in another key issue, the city council updated its laws to pave the way for the new dog park at the Meadow Wood Spots Complex. These were the main highlights of the May 2 WP City Council meeting.

Before Kroenig began his talk, Mayor Neil Levy told council there would be little discussion at this time about the deer. He said, “This is more of an informational update to give us an idea of where we’re at.”
According to Kroenig, this is the third year a deer count was conducted in the city. Each study was conducted in February of the year. This year’s study was completed in mid-April.

Kroenig stressed this was not a population estimate, but rather what he referred to as “minimum count.”

The study divided the city into seven zones. Each zone was surveyed by a team of Parks and Wildlife officials and volunteers in vehicles. Their goal was to record location, time, and direction of travel. They also looked at the age and sex of the animals. Caution was taken to avoid surveyors overlapping zones that would result in the same deer being counted twice.

Kroenig said conditions for this year were extremely difficult. He said, “Sighting conditions play an important role. It was a very cold and windy day.” The cold and wind had the deer hunkered down in
heavily treed areas which made it difficult for surveyors to find the deer.

The study concluded that over the last three years, the number of groups of deer was the same as 2017 at 53 groups. The total number of deer was 207 down from previous years, which experienced a high of 312 in 2018.

The number of fawns, per 100 doe was up significantly, from a low of 88, to 105 this year. Kroenig said, “We attribute the lower number of total deer to our sighting conditions.”

Now that the deer count is complete, council will hold a work session in the near future to determine how to proceed with dealing with the city’s deer. Levy said, “Let’s see if we can get a work session
scheduled in the next month or six weeks.

The workshop could determine what direction the city wants to take in controlling its deer population, or if any action is needed. 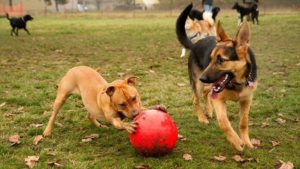 During the reading of ordinances on initial posting, City Attorney Jason Meyers presented an ordinance that will update the city code to include provisions for the use of the new dog park, expected to open next month. According to Meyers, this ordinance is to make sure laws are up to date with regard to incidents that may occur at the facility.

This will allow law enforcement to ticket dog park users for incidents such as vicious dogs and dog owners who do not clean up after their dogs at the park.

City Manager, Darrin Tangeman spoke in favor of the ordinance. He sighted two recent incidents where dog parks were closed in Evergreen and Breckenridge as a result of dog owners not cleaning up after their dogs. He said, “There is an impact if we are unable to enforce that.”

The ordinance will go to public hearing at the next council meeting on May 16.

In other council news, ordinance 1345 was read on initial posting regarding a conditional use permit for truck and trailer rentals (Uhaul rental) on lot 1, Aspen Acres at 19251 East Highway 24. This
was passed and will go to public hearing at the next meeting on May
16.

There was one appointed made by council to the Keep Woodland Park Beautiful board. Sierra Kinnamon was appointed unanimously to this board.

City Manager, Darrin Tangeman gave a brief talk about the completion of the Cultural Center renovation. He thanked the workers from Habitat for Humanity for their volunteer work that saved the city approximately $60,000 in labor cost to complete the project.

Assistant City Manager Suzanne Leclercq updated council on the upcoming 2020 census. Leclercq emphasized the importance of every person being counted. She told council that for every person not
counted, the state loses $2,300 in funding from the federal government. She also said there will be job openings for those interested in helping with the census count. Workers will be paid $13 an hour for their labor. Job openings can be found at the website:2020census.gov/jobs.

Finally, the city received a $9,000 grant to install an electric car charging station at Bergstom Park. The station is expected to be complete by June 1.