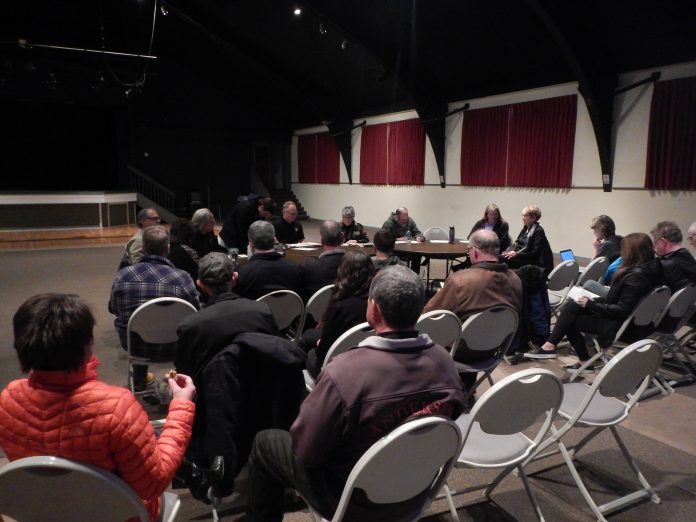 The DDA (Downtown Development Authority) held its first of what was supposed to be four workshops last week to gather public input on the future of Woodland Station.

At issue is whether this 10-acre downtown spot should be converted temporarily into an open space/park area, until a viable development project moves forward.

But due to a low turnout and what DDA Chairperson Merry Jo Larsen described as “a train wreck,” the other three workshops have been canceled. The DDA board experienced much criticism from certain community leaders at last week’s opening Woodland Station meeting.

Only about a dozen people showed up at the Ute Pass Cultural Center to participate in the workshop. The crowd consisted mainly of city staff members, real estate developers and financial folks.

Drew Stoll, a consultant with Great Outdoors Consultants, began the meeting with a description of how the workshops were to develop. He made it clear the first workshop was not going to outline too many details, but would focus on an opinion-finding session.

Before the meeting began, a paper was distributed that listed all the acreage of parks and open space
that is already in existence in the city.

At the beginning of the discussion, real estate agent Kerri Kilgore questioned the authority of the DDA to approve a plan. She said, “This is a sizable project, if the public supports it. Where does the council come into this, because it doesn’t make sense for the DDA to approve a plan that ultimately is going to be mothballed because it’s not really something the city can support.”

Larsen answered that is a premature question at this time.

DDA Treasurer, Tanner Coy went on to explain, “Whatever we do must be consistent with state law, city ordinances, and our own bylaws and foundation plan.” Coy stated that the DDA would not proceed with any plan without the blessing of council.

Councilperson/DDA Liaison, Kellie Case noted that council holds the purse strings to anything associated with the city including the DDA.

The question was raised as to the position of the DDA board in respect to making Woodland Station into a park. Larsen responded, “We would like to make an event/open space use of that, until it is developed,
through the free market. We’re trying not to build stationary buildings. We just want to make it look better, make it usable, not such an eyesore to the public.”

The next question raised dealt with how much money the DDA would be willing to spend on the property improvements, if it is turned into an open space area.

Larsen said, “It’s not how much, it’s how much we have to spare. We’ll take it one step at a time, as we can do it.” Coy also responded, “We can spend far less money, getting far more benefit out of that property, far sooner, if we go this direction (open space).”

Coy’s point was that the projects that have been brought forward at Woodland Station have all failed. And for a person to develop the property, a return on investment would be the primary goal of
development, explained the DDA treasurer.  At this time, he noted there is no one willing to take that
risk.

Following Coy’s  comments, the discussion then began to devolve into chaos, with DDA leaders taking a verbal beating. Comments were thrown out that the DDA isn’t trying hard enough to market the property, and restrictions have been imposed that make the property undesirable to developers

Larsen then argued that a park setting would strengthen the other properties adjacent to Woodland Station, which would ultimately improve the desirability of Woodland Station.

Tony Perry, president of Park State Bank, suggested the DDA should not be so set on creating a park He argued in favor of considering a 50/50 approach (commercial and open space). Perry said, “I would like to see a non-biased approach with both commercial development and a nice area.”

Larsen snapped back, “We intent to do that. We’ve been waiting 18 years for that.”

She was referring to a variety of proposed development plans for Woodland Station that has fallen through since 2005. In fact, the first notable plan featured a $60 million mixed use development that almost resembled a ski village.

Perry then asked the board, “How much will you take for the property?” to which Larsen said, “OK we will.”

Case who also works in the real estate industry, then suggested the property be listed again until someone comes along to buy the land.

Following last week’s discussion, the DDA has decided to cancel any further Woodland Station workshops. As a result, the issue could receive more debate at the city council level. Ultimately, the council will decide how much money can be appropriated for any type of new DDA plans for Woodland Station.