Warning:  Patience pills are needed for the next four years when traveling between Teller County and the big city for a Nuggets basketball game, an Avs home duel, a Rockies summer homestand, another Broncos loss, or a concert, show or convention.

Yes, the idea of a smooth, accelerated drive between Teller and Denver in the near future has hit a slight hurdle.

When traveling to Denver for the next several years, maybe consider a helicopter ride, alternative route, or make your plans accordingly. In fact, best of advice of all: Consult with the Colorado Department of Transportation (CDOT) for I-25 updates.

In a slight blow to transportation proponents in the area, officials from the Colorado Department of Transportation acknowledged last week that the much-touted completion of the “Gap” project between Monument and Castle Rock will be delayed for at least a year.

Also, lane closures are now in effect during the evening hours, and drivers will have to grapple with construction zones until late 2022.

This pronouncement is about a year later than what officials earlier predicted for the $350 million project, expected to make the drive much quicker between Teller County and Denver. 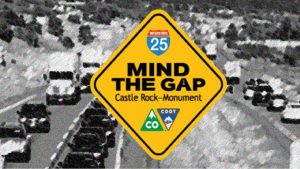 The 18-mile stretch between Monument and Castle Rock is often riddled with traffic delays and has posed challenges for Teller residents commuting to Denver, or traveling to the big city for events. At times, this stretch reaches a standstill, with many motorists falsely assuming their delays are associated with a fatal accident. Nope, their dilemma is part of a clogged-up interstate.

The somewhat controversial Gap project, which will include toll lanes, is designed to widen the I-25 Interstate to three lanes each way.

On the upside, the highway will remain open during the day for two lanes in both directions of the highway. The main closures will occur at night.

According to CDOT officials, the Gap expansion will take longer than expected due to unexpected problems and aging pavement.

CDOT held a “telephone town hall” on Jan. 30 for residents to learn more about the I-25 Gap widening. An automated system allowed residents throughout the corridor at random to participate. For information regarding updates, including weekly delays, call 720-745-5434 or check the I-25 Gap website, via the Colorado Department of Transportation.

The state is mostly funding the cost of the project, with a $250 million contribution.  Other monies include $65 million from the U.S. Department of Transportation and $35 million from local governments, including El Paso and Douglas counties.

A project open house is scheduled from 5 to 7 p.m. Feb. 7 at the Woodmoor Improvement Association Barn, 1691 Woodmoor Drive, in Monument. Attendees can talk to project experts and review informational displays.

Although the project is occurring outside of Teller County, local leaders have been big supporters of the effort. They have cited transportation improvements as a big plus for the region. Most elected leaders contend that improved major highway access between Teller and Colorado Springs and Denver will result in a stronger tourism/visitation market and better economic benefits.

The project, though, has been somewhat controversial in EL Paso County.

The El Paso County commissioners have expressed opposition to the idea of toll lanes since voters approved funds that allowed the project to receive the go ahead.

Since the project broke ground last summer, most of the work has occurred around the Castle Rock area, with minimal delays compared to normal disruptions.

But that scenario could soon change, as motorists will deal with much construction in the southern part of the route, which could cause more hassles in the Monument area, a section of I-25 already bombarded with delays.