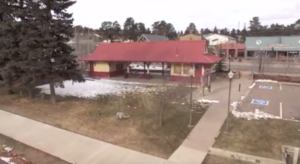 Discussion Ensues on Resolving the Fate of Woodland Station

The January 8 meeting of the Downtown Development Authority (DDA) kicked off 2019 with a final lawsuit wrap-up and discussion on the fate of Woodland Station, and a proposed amendment for handling this key anchor area that has sparked much controversy in the last few years.

The big item on the agenda was the disposition and development agreement for Woodland Station, but that issue was taken up in executive session. (see related story).

In a key issue that has commanded much attention, the DDA announced last week they have fulfilled their obligation to pay off the judgment handed down by the courts in the lawsuit with Arden Weatherford, owner of BierWerks The payment was made on December 28, 2018, in the amount of $161,575.33. This case is now history. Weatherford was awarded this amount of money, following a lengthy lawsuit that involved testimony from many civic leaders, city officials and past and current board members.

He spoke a bit about the history of the land and Bert Bergstrom’s vision that the land was to remain a place for public use and pointed to the fact that the current location adjacent to Memorial Park is being loved to death and parking is a major problem. Storrs pointed out that besides the usual daily citizen use, the Farmer’s Market attracted nearly 100,000 visitors to the park in 2017. He said, “We want to be in the best place for the city of Woodland Park.”

Storrs reiterated what a large portion of citizens of the city would like to see done with Woodland Station. He said if the area were to have a large multi-purpose building for events or turned into open
space it would be a fine place for weddings, birthday celebrations, and reunions, and the Farmer’s Market would fit perfectly into that concept. He pointed to the long waiting list that people who want to
use Memorial Park for celebrations must endure. “We need more space. We need more public space in Woodland Park.” said Storrs. He then quoted Bergstrom’s wish for the property. “I will fight to keep the property free for youth or community activities.”

A tough time for retail

Elizabeth Zuercher, the owner of Balanced Books in Woodland Park, gave a presentation on her company services and the state of business in the city.

Zuercher noted that the service industries in the area, including the county, are doing well, but retail businesses are struggling. She said a large part of the problem is the small customer base in the city/county, and that start-up businesses are often forced to relocate to the Springs to get a bigger slice of the customer pie.

A possible solution, Zuercher feels, could be for businesses to pool resources to help them succeed up here, but she also stated that perhaps Woodland Park is “just not suitable to retail.” These comments
prompted the board to suggest that they and Zuercher should get together in a workshop format to discuss ways to help start-ups get a better foothold in the city. Zuercher agreed to do that at some undetermined time in the future.