In a rare departure from the majority sentiment of commissioners across Colorado, Teller elected leaders are throwing their support behind a ballot plan, with one main goal: Fix Our Damn Roads. And Do It Now.

Under this proposal, entitled Proposition 109, the state would be forced to dedicate funds for transportation improvements by using existing monies, and without raising taxes. It would put the pressure on the state to borrow $3.5 billion in 2019 to fund 66 highway projects..

In taking this path, the Teller commissioners have joined their peers in El Paso County in butting heads with the Colorado Counties, Inc. (CCI) group, the main lobbying organization of county commissioners in Colorado over the future of transportation improvements across the state.  This is one of the rare times Teller County leaders have clashed with CCI over key policy issues.

In fact, Teller County Commissioner Dave Paul has served as president of CCI. At virtually every meeting, the current board touts the views of CCI.  But apparently not when it comes to transportation.

CCI is supporting a ballot proposition, entitled 110, which calls for a slight sales tax. It also would distribute transportation-related tax revenue to the state and local governments and for alternative transit projects. The campaign has hit the airways bigtime with advertisements featuring Governor John Hickenlooper and families, touting how many Texan vehicles they see on the roads.

With this package, the state could borrow up to $6 billion for transportation projects, with a newly identified revenue source.

But Commissioner Norm Steen, who serves as chairman of the Pikes Peak Area Council of Governments, and has been a key leader of many transportation groups, worries about the failure of another tax hike, plans that haven’t fared well in the past.

However, he mainly believes the state government needs to take a more aggressive stand in addressing Colorado’s crumbling roadways that are besieged with problems and constant tie-ups.

More importantly, he cites rural counties getting the shaft under the philosophy of 110, which he sees as a spending initiative that hits residents in the pocketbook.   “Rural counties are going to be left behind. That money would be taken from our residents.”

He doesn’t believe in the need for additional taxes to bail the state out, when the government is experiencing a huge $1 billion surplus.

He said the commissioners see the “Fix Our Damn Roads” initiative as a starting point in getting the state government to “step up to the plate” and seriously address transportation shortfalls, instead of relying on new taxes and regional groups, such as the Pikes Peak Rural Transportation Authority. 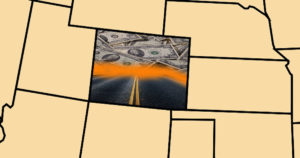 With a victory for Prop 109, Steen believes state officials will face more discipline in grappling with transportation and coming up with a legitimate state-wide effort to deal with key and needed highway projects. “We should have a state-wide interest (In transportation),” added Steen.

Steen frequently mentions transportation shortfalls as a rallying cry among rural residents.  If nothing gets done,  he worries that a bigger divide could occur between rural and metropolitan interests, with rural counties falling further behind.

One of the problems he sees is that government officials are relying on federal and state gasoline taxes and license fees to generate the needed revenue. And according to Steen, that formula is no longer working.

“That is a dying tax,” said Steen in discussing the gas tax.  “Revenues have been decreasing.”

The commissioner believes that trend is due to better technology with new cars, resulting in much improved gas mileage

Oddly enough, both transportation plans could generate significant long-term improvements, especially along the U.S. Hwy. 24 thoroughfare, even though they are slightly contradictory. In fact, both of these bills call for significant monies for U.S. Hwy. 24 improvements between Colorado Springs and Woodland Park.

What happens if both propositions pass?

That prospect still has state and local officials scratching their heads, with no clear answers. They could result in a court or legislative decision.

Regardless of what occurs on Nov. 6, the I-25 gap project, calling for additional lanes between Castle Rock and Monument, has officially started. This $350 million project, heavily endorsed by the Teller commissioners, is slated for completion in 2022, according to Steen. It would allow additional lanes in both directions of I-25 and create a toll lane for convenience.

The project will result in a much faster route between Teller County and Denver, according to officials. Currently,  motorists get bogged down when traveling between Monument and Castle Rock, with traffic often screeching to a crawling speed.

The $13.3 million Hwy. 67 enhancement project has come to a near complete conclusion. The only remaining aspects will deal with some striping.

In addition, a big safety improvement project in the lower Ute Pass is coming to a conclusion.

Talk is still circulating about revising pursuits for a highway bypass or detour in Woodland Park. However no real plans are in the works, but much speculation abounds.