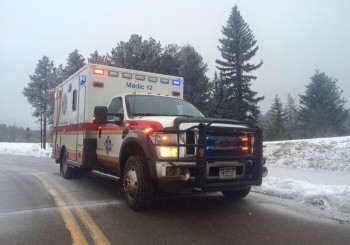 ~ by Bob Volpe ~
Voters in the Ute Pass Regional Health Services District will find measure 7A on the November ballot asking for a half-cent increase in the district’s sales tax.

In an interview with TMJ News, president of the district, Tim Dienst, explained why UPRHSD is seeking the sales tax increase.

Dienst went into great detail on the need for more tax money to keep the district’s ambulance service alive. He began by explaining that the service is, “An essential community service. As an essential service, it is not excludable. We have to supply services to everybody regardless of their ability to pay, no matter where they are from, no matter how much they owe us.”

This brought up the question of retaining the highest quality people for the district. According to Dienst, there is a shortage of paramedics in the state and competition to retain these individuals is high. This creates a situation where other districts are vying to get these people on their crews, and a price war is making it hard to keep crews.

The district covers a staggering 540 square miles. It covers all of northern Teller County, a large part of southeastern Park County to the summit of Wilkerson Pass, the Tarryall wilderness region, and 36 square mile of the Westcreek area in Douglas County.

Dienst explained the district is experiencing a large increase in call volume, resulting in longer response time. According to Dienst, response time in Woodland Park alone has increased from seven and a half minutes to nearly 15 minutes since 2008. 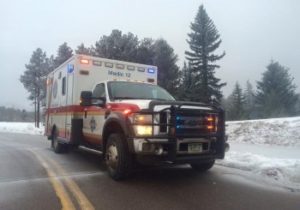 One significant obstacle facing the district is the rising costs of providing service and the declining payments from key government entities. Dienst explained the largest users of ambulance service are by patients on Medicare and Medicaid.

These agencies only pay a cut rate that is not in keeping with the simple cost to send an
ambulance on a call. According to Dienst, only 20 percent of payers are from private insurance and those companies are paying less of the cost of service.

At this time, the district continues to offer a 50 percent discount to district residents, but if this measure passes, the district will offer what is called, “The District Resident Only Billing Program.”

Under this program district residents will have no out-of-pocket costs after insurance pays their part of the ambulance bill.

Ultimately, if this tax measure fails, Dienst warns that further cuts of paramedics, essential equipment like cardiac monitors and ambulances will be reduced or cut. In addition, the district president predicts that rising response times will get worse, and there will be no ambulances available to respond at times due to multiple calls at one time being called for.