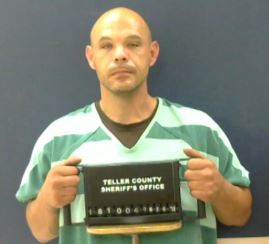 Deputies discovered a female had been assaulted by Lincoln L. Ernest, a 44-year old Colorado Springs man who had a drug warrant outstanding for his arrest out of El Paso County.  The warrant stated Ernest was armed and dangerous.  A witness told deputies Ernest was armed with a 9mm pistol and had fled on foot just prior to their arrival.

A perimeter was set up and TCSO requested the assistance of K9 units from the El Paso County Sheriff’s Office.  Portions of the Indian Creek Subdivision had to be shut down temporarily in the interest of public safety while every residence nearby was checked for Ernest by deputies and K9 officers.  Ernest was taken into custody without incident nearby at about 8:15 pm.  The gun was not immediately found.