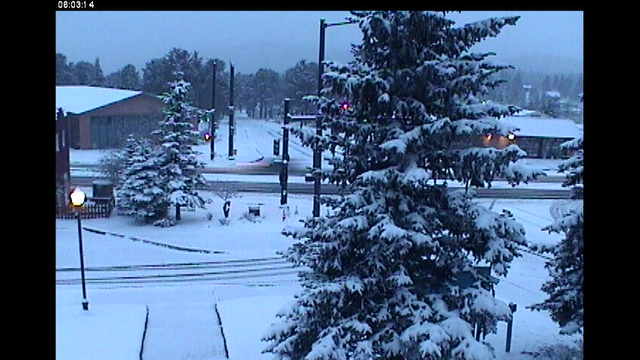 After days of red flag warnings and abnormally dry conditions in the area for the month of April, many local residents have wished for snow.

the extended dry spell has ignited concerns by fire safety experts. Many believe that if the region does not get its usual excessive spring snows than the area will be riddled with scary forest fires all summer long.

For many, their wishes were partially realized last Friday, when a lingering storm invaded Teller County. The storm came in early afternoon, with menacing dark clouds. Next, the snow started, coming down lightly at first then increasing to heavy snowflakes and creating decreasing visibility. The scenario then turned into a serious blizzard, with a flurry of weather-related accidents.

The blizzard-like conditions only lasted for a few hours, but it was enough time to cause major problems in the region.

In lower elevations such as Colorado Springs, the storm only brought cloudy, foggy conditions and rain. 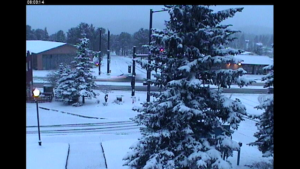 Places in higher elevations received different amounts of snow accumulation. In Woodland Park, the snow came down hard then stopped leaving only about 2 to 3 inches of snowfall. The roads in Woodland Park were mainly just wet and slushy throughout the evening.

However, communities further up the mountain, such as Cripple Creek and Victor, received higher snowfall amounts and icier road conditions. According to local reports, the snow stayed steady in the area most of the evening.

At around 7 p.m. on Friday, the Teller County Sheriff’s Office put out an alert, warning the public about icy road conditions. According to the alert, deputies responded to a number of car accidents on Hwy. 67  between Tenderfoot Pass and the Molly Kathleen Mine. The thick fog and snow caused extremely icy conditions on the highway. Shortly after the first alert came out, authorities made the decision to close down Hwy. 67, south of Divide, to all vehicle traffic.

About an hour later, conditions improved, allowing officials to re-open Hwy. 67 in both directions. A third text message alert warned the public to be cautious because icy conditions may still exist throughout the night. Reports circulated too about a slew of minor accidents.

Conditions also were quite hazardous in the lower Ute Pass area, and for motorists trying to drive between Woodland Park and Colorado Springs