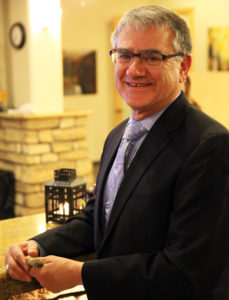 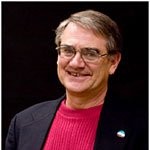 ~ by Bob Volpe ~
The relationship between the TMJ News and City Manager David Buttery has mostly been cordial but sometimes stormy. We’ve often poked fun at him in our pages, particularly in our April Fool’s editions.


Buttery has for the most part taken our ribbing with a grin and a grain of salt. Whenever any of our reporters or staff representatives needed to talk to him about any issue, he was always gracious and forthcoming.


Buttery left office late last week (ironically?) on Friday, April 13, after 20-plus years of service as both city manager and public works director. Before stepping down, Buttery sat down with the TMJ to discuss his tenure and his relationship with the community.

TMJ: How did you decide to make Woodland Park your home?
Buttery: I had a military career. I got to Fort Carson in 1991 and the unit I was with was the 4th Engineer Battalion. In 1992 the battalion established a relationship with Woodland Park, primarily through the Kiwanis and the city. We came through Woodland Park, just like most everyone else, to go skiing, but after 1992 there was a stronger connection with the unit I was in and Fort Carson. I was up here with my family and in-laws during that Fourth of July so we got to know the town a little bit, got to know some of the people a little bit. Fast forward several years, I’d done my time with the 4th Engineer Battalion, went overseas to Turkey for 13 months then came back to become the public works director at Fort Carson. From ‘95 to ’97, I was the public works director at Fort Carson. It was time for me to leave the military after that and we wanted to stay in this area because we were very involved with our church and we really liked the area, just like everybody else. We started looking for work in the general Colorado Springs area, both in the public sector and the private and then I got word that the public works director job was open in Woodland Park. I came up in; I think May of 1997 to do an interview. The one hour interview turned into three hours and the city manager (Don Howell) offered me the job. My
wife and I discussed it and we decided to accept it. I started work as the public works direct on July 7.

TMJ: How did you wind up with the city manager job?
Buttery: I came to the job in a round-about way. Mark Fitzgerald (city manager at the time) gave his notice in November of 2006, and so the council at that time put together a committee of two council members, two staff members, and two citizens to begin the review process of the applicants. I was not one of those staff members. I had been encouraged to apply for the job but had a family tragedy before that and it entailed rehabilitating our son and grandson to get them back to a place where they could live independently. So we were just trying to get our lives back together. I just didn’t have the emotional state to do it then. They went through the process and narrowed the applicants down to four, I think. Those four came and interviewed and the council selected candidate A. I don’t remember his name. Everybody was happy, then around the end of March 2007 the candidate, and this was a few weeks before Fitzgerald was leaving, decided he was not going to take the job. From what I remember, the council was not too thrilled with candidates B, C, or D. And so once again I was encouraged to apply, and so I met with the mayor and council. Three weeks later I was hired.


TMJ: How do feel about the way the election was run this year?
Buttery: I’m not going to comment on that. I get to vote and that’s the way that’s gonna’ go.


TMJ: How do you feel about the way council meetings have been run lately?
Buttery: What I’ll say generally, is, I think my overriding emotion through a lot of these things with some of the public discourse, to include things that have been happening at council meetings, not necessarily by council members, but just at the meetings themselves, leave me very sad. Our community is better than this and I just think some of the accusations towards me and towards the council, ah, I was angry at first. My integrity is, other than my faith and my family the most important thing I have. And when that’s challenged that makes me very, very upset. And despite trying to refute some of those accusations, they still keep coming and that just makes me sad. It makes me sad that we are living in a time when social media can seem to dictate people’s beliefs on certain things and the vast majority of the stuff on social media has just been untrue. When I ask people to join me and look at facts and figures, audits
and contracts, very few want to do it. It’s just easier to tell stories than it is to learn the truth.


TMJ: On that note, was there an independent audit on the costs of the Memorial Park renovation and the Aquatic Center?
Buttery: There were no overruns. We’re being audited right now. Our annual audit is going on right now. The audit looks at procedures and then they run all the numbers to see what our final balances are.Whether they will look at the contracts for those projects and audit those, I’m not sure. But, what I can do is, I can pull out budgets and contracts and the final bills that we paid to show that we didn’t exceed what the council authorized us to pay. Now, what I think is that when you do an initial estimate of something and then you go into engineering and different things, costs are going to change. We started the process of the park and the pool years before shovels hit the ground so many dynamics changed. If that’s what they are comparing (this situation) to, I still don’t think it’s 50 percent. The truth is, we brought the contracts to the council. The council approved every single penny and we paid less for each of those projects than the council approved.


TMJ: The voters approved $10.1 million for the pool and the final cost was $13.8 million so what happened?
Buttery: $13.665 million something like that yup. The bond was never intended to cover the full cost. If you go back and look at your own paper, or the Courier, or even council minutes you’ll find that we’ve always said that the $10.1 million would be supplemented by three sources. A general fund cache, because we saved our money, people were saying we were just spending every penny that we’ve got. That’s not true. We saved a lot of money to put a down payment on the aquatic center and that’s exactly what we did. We also used some of the 410 Street money, because we made improvements along Baldwin. So one of the things to keep in mind is the $13.665 million number includes every penny that was spent on that project. So all the design, and all the construction, it even includes the legal ad we put in the paper to transfer the property from the school to the city. So it’s every single penny. Design and construction of the facility, of the parking lot, of the drainage, and the improvements to Baldwin. Everything is in that total number. ($13.665 million).


The $10.1 million was added to our savings from the general fund, added to the cost of the drainage and road improvements that we used the 410 fund for, and donations. We managed the contract so well that we were able to put the big slide in. We had about $160,000 in savings on the contract. When we realized that was going to happen we went back to the community and asked if they would match that, so we could get the slide. The community and businesses came forward. I kept track of
every dollar. It’s public information. So this nonsense about us not managing the contract; it is just that. nonsense.


Buttery: That’s the truth. It was resolved. There were 10 subs that had claims. I’m not certain on the exact numbers, but of the 10 there was approximately $330,000. What was left on the retainer was (approximately) $230,000. So we couldn’t pay the retainage because of the claims and because the claims exceeded the retainage. So we had to withhold that. The subs had 90 days to file a claim against the general or the general had the ability to settle with the subs. One subcontractor filed a claim for $111,000. The general paid, I think six of the subs. There were two or three subs that we’ve not heard if they’ve been paid. We did hear that some were paid. But what we know is that the bonding company for the general contacted us and said, you know you have one lawsuit filed against the general for $111,000. Hold on to that $111,000, release everything else and we’ll hold you harmless
from any other action against CMS (the general). So we’re holding onto the $111,000 until the suit is settled.  As far as I know all the local subs were paid.


TMJ: We are curious as to what you think of the TMJ?
Buttery: I can handle the fun being poked at me. What I can’t handle is when there are exaggerations for the sake of embellishment for exaggeration’s sake. I don’t like that.  I’ve always gotten along with everybody from TMJ. We’ve always had a good relationship. There were a couple of times when I was really mad. I’ve had my head chopped off I’ve had a bunch of other stuff done to me. That never really bothered me. We had a fatal shooting. One of our police officers shot an armed robber and it was a blood-splattered front page. That was just totally inappropriate. That just made me so mad because it was just so unprofessional. I think if we get rid of the use of sensationalized things, that things have been fairly accurate.

TMJ: When he finally gets to wake up late and not have to deal with the slings and arrows of public life, Buttery said he is just going to do the projects and things he wants to do. We at the TMJ wish him the best in his retirement and a long and healthy life to him and his family.

[photos and video by CR Chambers]